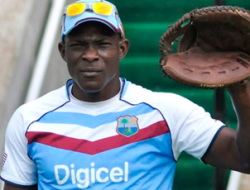 Young all rounder Yannick Ottley scored a matured unbeaten 76 yesterday, to lead the T&T Red Force to a come from behind six-wicket win in their second round game in the WICB Professional Cricket League at Warner Park in St Kitts.

Starting the day needing 107 runs with eight wickets in hand, the only worry Red Force had came just before tea time when rain arrived on the scene.

After a short break the players were back on the park and the victory was formalised when Ottley clipped a delivery on his pads to the fine leg boundary. The right hander finished 76 not out off 230 balls in 324 minutes with eight fours and a six.

When play started Ottley had as his company the experienced Jason Mohammed. The two who got together with the score at 42 for two on the third evening, batted well together and added 104 runs for the third wicket.

After passing his half century, Mohammed was caught off the bowling of leg-spinner Anthony Martin. His 56 came off 131 balls in 136 minutes with two fours.

At the fall of Mohammed’s wicket Nicholas Pooran stepped in and curbed his natural aggressive style for occupation of the crease. He finally fell for 23 in 71 minutes off 57 balls with two fours and a six.

Ottley meanwhile, was batting solidly and struck the winning run to ensure T&T got the 12 points for the win. In fact they got a total of 15 points, while the Leewards walked away with four.

T&T will now turn their attention to Jamaica, who they play from Friday at the Queen’s Park Oval in Port-of-Spain.

Taken from the Trinidad GUardian