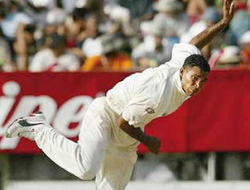 Barbados batsman Omar Phillips, who was struck on the head by the ball at the non-striker’s end on Friday in a West Indies first-class game, has been cleared of serious injury.

A CT scan was done on Phillips after he had lost consciousness as a result of being hit on the back of his head, despite wearing a helmet, on the first day of Barbados’ game against Windward Islands. The scan, according to a statement on the WICB website, “came up negative for any damage”.

Phillips, 28, an opening batsman who had played two Tests for West Indies in 2009 against Bangladesh, was batting on 38 when a shot from Barbados’ No. 3 Shai Hope struck him.