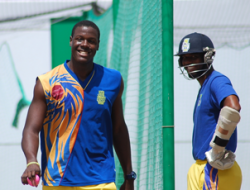 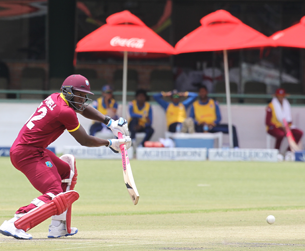 HARARE, Zimbabwe, CMC – Impressive rookie all-rounder Rovman Powell has urged West Indies not to relax on the heels of their convincing victory over Sri Lanka in the opening game of the Tri-Nations Series here Wednesday.

The 23-year-old all-rounder played a starring role on debut as the Windies trounced the Sri Lankans by 62 runs at the Harare Sports Club, to make a winning start to the tournament which also includes hosts Zimbabwe.

“I think it was a fantastic team effort to see a young team gel and beat a strong Sri Lanka team,” said Powell.

“It’s been a while we haven’t beaten Sri Lanka in competitive cricket but what we need to do now is not get complacent. We have a next game in three days time so we need to go back to the drawing board and sharpen the areas that need sharpening.”

Powell produced a masterclass in power-hitting, smashing a 29-ball 44 with two fours and three sixes, to power West Indies to 227 all out off 49.2 overs after being sent in.

Fellow debutant Shai Hope got 47 while left-hander Jonathan Carter celebrated his 29th birthday with a measured top score of 54.

Powell, who impressed on the recent West Indies A tour of Sri Lanka, said he was pleased with the way he had gone about his innings.

“The thought process was very simple. Going out we knew that 230, 235 would be a challenging total on this wicket so what I did, I just tried to get myself in and tried to bat to the end. While I was batting I started to find my range and then I started to get going,” the Jamaican explained.

“I think it was smart cricket. You have to mix your aggression with a little bit of finesse and I think I did that well today. After I got a boundary, I tried to come off the strike, I tried to get a single or a double just to calm back down and start to re-assess again.”

Powell’s rise to the senior ranks has been meteoric. He has played just one first class game but caught the eye during a practice game for West Indies last year and followed that up with a impressive outings in the Caribbean Premier League for champions Jamaica Tallawahs.

On Wednesday, he showed no signs of nervousness as he plundered the Sri Lankan bowling, and said he always trusted his ability at the crease regardless of the situation.

“I try to back my preparation and try to believe in my work and and I’ve worked extremely hard so I try to stick by that,” he pointed out.

He added: “It’s a pressure game but still you have to back your ability and back how you prepare for these games.”