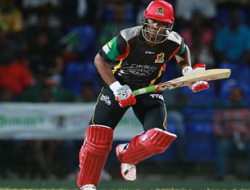 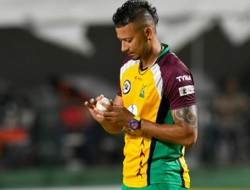 Sunil Narine‘s career-best 79 off 45 balls, made partly possible by some horrendous fielding from Barbados Tridents, helped Trinbago Knight Riders retain their top position in the 2017 Caribbean Premier League with a two-wicket win. In a highly entertaining contest, though not necessarily for its quality, Knight Riders squeaked past the Tridents total of 152 for 9 with five balls to spare for their fourth win in five games, while Tridents suffered their second defeat.

After inserting Tridents, Knight Riders captain Dwayne Bravo opened with spin in the form of Khaya Pierre. The left-armer dropped short in his second and third deliveries, and Dwayne Smith struck him for a four through point and a six over midwicket. Pierre then adjusted to a fuller length and had Smith, trying to slog, hole out to deep midwicket in the fifth ball of the over.

Tridents coach Robin Singh has a reputation for sending bowlers up the order as pinch-hitters, but his ploy failed with Wayne Parnell. Sent up to No. 3, Parnell lasted three balls before Ronsford Beaton had him splicing a catch to midwicket in the second over to leave Tridents on 19 for 2.

Two nights earlier, in St Lucia, Smith became the sixth player to reach 7000 runs in T20 cricket. On Saturday night, at Queen’s Park Oval, his Tridents team-mate Malik, became the seventh, getting there during a 71-run third-wicket stand with Kane Williamson that repaired the Tridents innings.

Malik shone against the medium pacers, driving Kevon Cooper twice to the boundary in the sixth, before unleashing two cuts and a pull off Dwayne Bravo in the ninth. The 7000th run also brought up Malik’s fifty, with a single off Narine. But he fell two balls later to Beaton, who bowled superbly to finish with 2 for 24. Tridents lost wickets consistently thereafter, but brisk cameos from Nicholas Pooran and Akeal Hossain ensured a furious finish to their innings.

Wayne Parnell’s yorker to bowl Brendon McCullum in the fourth ball of the chase gave Tridents an early lift, but it was short-lived. Tino Best set the tone for a diabolical fielding performance in the following over, with a match-defining drop.

Narine had driven Wahab Riaz’s first two balls for four when the bowler dragged his length back to induce a skewed pull back over his head. Best, at mid-off, called off Pollard at mid-on as the ball floated gently for a simple chance, only to spill it and leave Pollard stone-faced.

Pakistan’s players may have been called back by their board, but Wahab’s team-mates had a funny way of showing how much they’ll miss him, putting down chance after chance off his bowling. Narine was on 35 in the 10th, with the score 70 for 2, when a top-edged pull swirled towards Shamar Springer, who slid at deep square leg but couldn’t hold on.

Wahab cramped Darren Bravo later in the over for a caught behind, and two balls later, Pollard had Denesh Ramdin caught at long-on to even the scales at 76 for 4. But Narine continued in his adventurous ways at the other end, striking Malik down the ground for six and then a single to bring up his maiden CPL fifty, off 27 balls. He then flicked Pollard over square leg for six and four in the 13th to move to his career-best T20 score.

Wahab, and the drops, returned in the 14th. Narine was on 62 when he skied one to long-on where Barnwell, off balance having skidded on the slick grass, shelled the chance. Two balls later, he put down Dwayne Bravo at deep square leg off Parnell, despite being firm-footed on this occasion.

Knight Riders needed 21 off 24 balls when wickets started tumbling. Dwayne Bravo played around a good length ball from Springer that jagged back to clean him up for 18. Shadab then dragged Parnell on in the next over for a duck, but Knight Riders still had Narine with eight needed off two overs.

He fell on the first ball of the 19th, picking out sweeper cover off Springer. Javon Searles crunched the next delivery to the midwicket boundary, but finished the over having dragged a full toss to Parnell in the circle. It boiled down to Knight Riders needing two runs off the final over with two wickets in hand. Kevon Cooper sealed victory when he drove the first ball from Best through point.