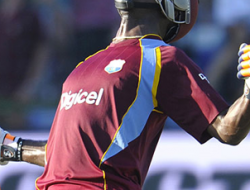 PORT OF SPAIN, Trinidad, (CMC) – Champion off-spinner Sunil Narine wrecked Guyana Jaguars with a remarkable six-wicket haul as Trinidad and Tobago Red Force stormed to an emphatic 135-run victory in the final of the NAGICO Super50, to claim their 11th regional one-day crown here last night.Chasing 201 for victory at Queen’s Park Oval, Jaguars collapsed from 36 without loss to 65 all out off 24 overs, with the ruthless Narine scything through the innings to finish with six for eight from eight overs.

Opener Trevon Griffith top scored with 31 from 28 balls with six fours but once Narine removed him in the seventh over, caught by Kieron Pollard at first slip, the innings plunged into terminal decline, with the visitors losing their last ten wickets for 29 runs.

Griffith was the only batsman to reach double figures for Guyana.

Jason Mohammed, who had earlier stroked a brilliant unbeaten 117, supported with two wickets for three runs with his off-spin while seamer Dwayne Bravo finished with two for 29.

The victory was Red Force’s first regional one-day title in five years and it made up for the pain of last season’s final when they were beaten by Barbados.

“Leading the country to a title, that feeling is always up there. We haven’t won a title in some years now besides the T20,” captain Rayad Emrit said afterward.

“The 50-over title eluded us last year and I was part of [the final] when I got run out so it’s a good feeling now, a bittersweet feeling and I am really excited.”

Jaguars captain Chris Barnwell said his side’s batting never clicked but noted that Narine had made the difference in the outcome.

“We’re very disappointed. We played some good cricket leading up to the final but Sunil Narine just took it away from us.”

The right-handed Mohammed had earlier fashioned a well controlled maiden regional one-day hundred to help fire Trinidad and Tobago Red Force up to 200 for eight off their 50 overs after they were sent in.

With wickets tumbling around him, the right-hander stood firm to unfurl a high class innings off 132 deliveries and hold the innings together in the face of turmoil.

Surviving a chance on 69, Mohammed went on to count 11 fours and five sixes, helping to rally the innings with four key partnerships after Guyana Jaguars had made early inroads with their varied attack.

He put on 38 for the third wicket with opener Jeremy Solozano (21), 43 for the fifth wicket with Dwayne Bravo (10) and another 34 for the sixth wicket with Kieron Pollard (9).

However, it was his unbroken ninth wicket partnership of 52 off 33 balls with Emrit, who finished 12 not out, that turned the game around for Red Force.

Languishing at 148 for eight in the 45th over, the hosts seemed unlikely to get anywhere near the 200-run mark but Mohammed helped plunder 42 runs from the last three overs to end the innings on a high.

He reached his century off the third ball over of the final over when he clipped seamer Paul Wintz to the square leg boundary. He then struck another leg-side four before finishing the innings with two superb off-side sixes, in an over that leaked 21 runs.

Despite Mohammed’s exploits, Jaguars had the best of the early exchanges thanks to left-arm spinner Veerasammy Permaul who finished with three for 22 while seamers Royston Crandon (2-27) and Wintz (2-44) who picked up two wickets apiece.

Mohammed and Solozano were the only two batsmen to pass 20, as Wintz struck with the first ball of the game, trapping left-hander Evin Lewis lbw on the back foot without a run on the board.

Star left-hander Darren Bravo made just five before he superbly caught by substitute Vishaul Singh diving to his left at square leg off Wintz, as Red Force stumbled to 14 for two in the seventh.

Mohammed then emerged from a dodgy start to make his mark, toughing it out to reach a half-century off 81 balls with a cut to the point boundary off Bishoo in the 33rd over.

In reply, Jaguars put Red Force on the back foot, racing to 32 without loss at the end of the fifth over, with Griffith scoring freely against Dwayne Bravo and Ravi Rampaul, on either side of the wicket.

Narine’s introduction changed the course of the game. He plucked out Griffith with his fifth delivery and in his next over, befuddled Raymon Reifer and trapped him lbw for one with a doosra at 38 for two after nine overs.

Opener Rajindra Chandrika fell over a full length delivery and was palpably lbw for seventh in the 11th over and Jaguars were falling apart when Barnwell missed one that nipped back from Dwayne Bravo and was lbw without scoring.

Narine then struck the key blow which deflated the Jaguars, deceiving veteran West Indies left-hander Shiv Chanderpaul for seven with one that came back and hit the batsman plumb on the back foot, as he looked for turn the other way.

Chanderpaul’s dismissal left Jaguars in tatters at 49 for five at the end of the 15th over and when Dwayne Bravo pulled off a dazzling return catch off Anthony Bramble’s miscued pull three overs later, Red Force’s victory was inevitable.