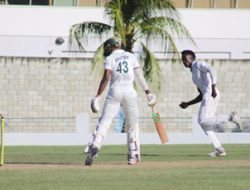 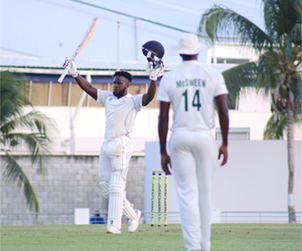 The left-handed all-rounder went on the rampage against his former teammates and was undefeated on 121 – his second first-class hundred – at the close on the first day of sixth round matches in the Championship.

Scorpions (216) vs Jaguars 0-0 at the Trelawny Multiplex in Florence Hall, Jamaica

Permaul defied a half-century from Test batsman Jermaine Blackwood to grab 7-59 from 30.5 overs to destroy the Scorpions batting, after they appeared to be on course for a more promising total on 118 for three.

Coming off wins in their two previous matches, the Scorpions were dismissed about 25 minutes before the scheduled close, after they were sent into bat.

Blackwood led the way with a typically flamboyant 59 – his third half-century in four innings – and Denis Smith made 23 and was the only other Scorpions batsman that passed 20.

Scorpions were 60 for three, when Blackwood and Nkrumah Bonner put on 58 for the fourth wicket.

But there was little stability to the Scorpions batting and when Blackwood was lbw to Permaul, the home team found themselves wobbling on 156 for five.

There was to be no comeback for the Scorpions, and they lost their last five wickets – three to Permaul – for 44.

Permaul has carried his tally of scalps for the season to 37.

Pride 357-7 vs Volcanoes at Kensington Oval in Bridgetown, Barbados

Put into bat, Pride stumbled to 132 for five in the first hour after lunch on a rain-marred day.

But Mayers transformed the complexion of the innings with an array of meaty strokes to all parts of the ground to complete his second hundred of the season against these same opponents following his 106 in their first-round match at the Arnos Vale Cricket Ground in St. Vincent

The left-hander, playing for home franchise after spending four seasons with the Volcanoes, built strong alliances with the lower order to drag the Pride from the precipice, gaining admirable support from Kevin Stoute and West Indies pacer Kemar Roach in successive half-century stands.

Mayers shared 92 with Stoute for the sixth wicket and put on a further 92 for the seventh wicket with Roach to frustrate the Volcanoes in between two brief stoppages for rain.

Mayers’ innings carried him to the brink of becoming the first batsman this season to clear the 500-run mark. He needs only two more.

Jeremiah Louis made an impact on his return to the Hurricanes line-up, taking 3-32 from 17 overs, and Berridge continued his diligent work this season, capturing 2-50 from 17 overs to put the skids of the Red Force batting.

Red Force, trying to turnaround a season that has sputtered in the last three matches, failed to make hay after the weather delayed the start by 1-1/2 hours.

Opener Isaiah Rajah, playing his first match in the Championship in two years, has the top score so far of 41, Joshua da Silva made 37 and former captain Jason Mohammed added 30.

Red Force lost opener Jeremy Solozano and their captain Yannick Ottley cheaply, and were looking shaky on 40 for two.

A stand of 51 for the third wicket between Rajah and Mohammed stabilised the innings, but the Hurricanes attack steadily chipped away at the Red Force batting with successive batsmen failing to build on their starts.

(Before the sixth round of matches)