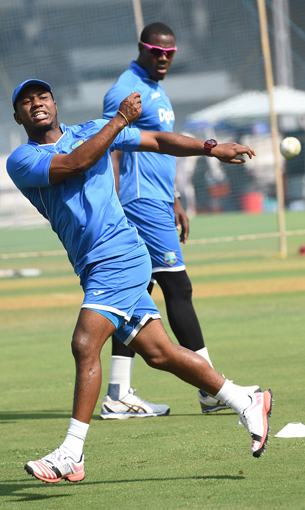 20th September 2016 Comments Off on Lewis hoping to leave a mark in Dubai Views: 1233 News

DUBAI—Rising Twenty20 star Evin Lewis says he is anxious to build on the encouraging start to his career, when he lines up against Pakistan in the upcoming three-match T20 series starting here next weekend.

The left-hander has played just three T20Is since making his debut last April but made a huge impression when he blasted exactly 100 against India in Fort Lauderdale, United States last month. Lewis said he was intent on continuing to be positive and playing to his strengths.

“I am pretty excited. It’s my first time in Dubai and I’m looking to grasp the opportunity and perform well,” the 24-year-old said.

He added: “I’m always positive, and that’s the most important thing. You have to know the areas where you can score. For me, it’s probably back of a length balls and half volleys that are my strengths so I just back myself every time they come to go over the top.”

Lewis’s brief international career has been a story of grasped opportunities. He made his debut in the T20 World Cup as a late replacement for the injured Lendl Simmons and then broke into the team for his second game in the recent two-match series against India, when superstar Chris Gayle pulled out with injury.

He stepped up to blast five fours and nine sixes in a 49-ball innings and help propel West Indies to an exciting one-run victory in the opening game.

Lewis put on a stroke-filled 126 for the first wicket with Johnson Charles who made 79, a partnership which laid the foundation for the Windies’ victory.

“It was very shocking to me to know that he (Gayle) wasn’t playing but at the same time I said this could be my opportunity to put myself on the world stage. I went in there and was positive and it paid off for me so I was very happy about it,” Lewis said of the innings against India.

“It’s pretty decent with me and Jono (Charles). You know Jono is a very attacking batsman as is myself so it’s less pressure on me. When I see him scoring it’s then easier for me to score also so I am thankful for that.”

Lewis will be hoping to get his first taste of action today when West Indies take on an Emirates Cricket Board XI in a warm-up T20 at the ICC Cricket Academy here. And with the opening T20 International scheduled for Friday, Lewis said it was important the Caribbean side made the most of the encounter.

“We just have to go out there and be positive,” the Trinidadian said.