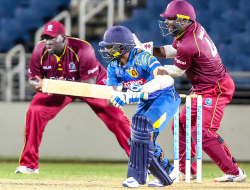 Windies ‘A’ look to rebound after loss to Sri... 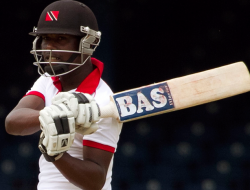 Ramdin, Mohammed put Volcanoes to the sword in record... 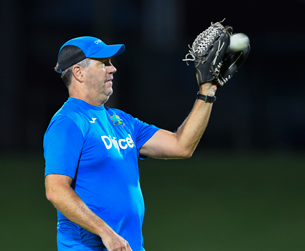 After a tough tour of England, West Indies won their first Test series under Jason Holder’s captaincy after a 1-0 victory over Zimbabwe. Coach Stuart Law, who has been in the position for a year, was full of praise for his captain, and for some of the players who struggled in England but played defining roles in Zimbabwe. Devendra Bishoo took just three wickets in England, but was named Man of the Series for his 13 wickets across two Tests in Zimbabwe, while Shane Dowrich overcame poor form to score his maiden Test hundred.

“I’m super proud of Jason and the way he’s led this team, as well as the way the boys have played,” Law said. “For Devendra Bishoo to come here after a tough series in England and get Man of the Series is a great effort, and I thought Shane Dowrich has been outstanding. His glovework behind the stumps and that hundred was great. I’m very proud of our boys.”

Law has played a fundamental role in West Indies’ steady progress in recent times, and has been a strong advocate for giving selected players extended runs in the team. West Indies came to Zimbabwe with the same squad that had travelled to England, and Law suggested that he would like to keep the squad together when West Indies move on to their next engagement in New Zealand.

“I’ve been pretty clear to the selectors that this group that we have together is worth working with,” Law said. “It’s a short turnaround between now and the New Zealand series, to bring someone else – or a number of players – in, I don’t think would be a great move. We would have to start again with those players. We’re starting to make strides and go forward. We competed well in England and won a Test match there, we’ve now won a series in Zimbabwe. I think it would be great if we could keep the guys together. Those guys who have struggled might be our heroes in the next match. I understand some people think we could chop and change, but I believe that if we stay together and become one, we’ll start producing the results.”

Law was particularly impressed with the performances of his two fast bowlers, Shannon Gabriel and Kemar Roach. Gabriel touched 150kph during the series, picking up five wickets, while Roach filled the role of senior seamer to perfection with eight wickets at just 17.25.

“On very slow, low wickets, to have Shannon and Kemar doing what they did was great to watch,” Law said. “When the ball was flying through, it excites everybody at the ground. They toiled manfully in these conditions. The first Test was very hot and dry, and they kept coming. Those guys have been great and the captain himself got a hundred in the first innings and bowled well today as well. I can’t be more proud of our boys. Fast bowlers get the rough end of the stick in these conditions, but it was tough for the spinners as well. The turn was slow and the batsmen had time to adjust. I’m sure our fast bowlers are looking forward to going to New Zealand.”

Law was also magnanimous enough to praise Zimbabwe’s efforts at putting up a good fight and battling to a draw in the second Test. “Zimbabwe are full of quality cricketers. To come here and beat them in their own patch is a tremendous effort. They have some high-class players.”

Aside from his gripes with the use of the DRS in this series, Law’s only other point of contention was the quality of pitches that Zimbabwe provided. Both tracks played slow and low throughout, resulting in a lot of hard graft for both bowlers and batsmen and some moribund cricket.

“It’s tough enough taking 20 wickets in a Test match, but when the pitch offers you nothing on the final day It seemed to offer more on days one and two than it did on days four and five. Credit to Zimbabwe, they fought really hard.”

“The challenge [for Zimbabwe] is always going away from home. To play your cricket on slow, turgid, nothing wickets is not really going to set yourself forward and continue your growth to win games of cricket. We have issues around the world with the quality of pitches, especially when a touring team lands on your shores. I’d just like to see a more even contest between bat and ball. We’ve come from England where the ball was swinging and seaming, it provided great cricket. There are a lot of people saying that Test cricket is dying; on a pitch like this, it is. No disrespect – they utilised what they had to get ahead, but for the growth of the sport, I think we need to be growing on better pitches.”