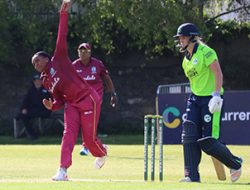 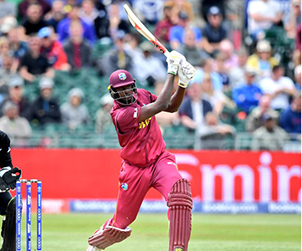 BRISTOL, England – West Indies captain Jason Holder spoke to members of the media following a brilliant performance against New Zealand in the second official warm-up match ahead of the ICC Cricket World Cup. West Indies were asked to bat first and made 421 on a superb batting surface at the County Ground in Bristol. They them bowled out the Black Caps for 330, to win by 91 runs.

Shai Hope led the batting with a classy century – 101 off 86 balls with nine boundaries and four sixes. He then took a catch and completed three stumpings as the West Indies made full use of their second pre-tournament match ahead of the opening encounter on Friday. Andre Russell showed his power with a blazing 54 off just 25 balls – which included three towering sixes.

Opener Evin Lewis hit an even half-century off 54 balls in an opening stand of 59 in seven overs with Chris Gayle (36 off 22 balls). Hope and Lewis added 84 for the second wicket and later in the innings Holder made 47 off 32 balls to maintain the momentum.

“That performance should give the entire group a lot of confidence, I thought we batted really well and we kept the momentum going through the innings,” Holder said. “Credit to the way Shai played, I thought Chris was outstanding at the beginning, getting us off to a good start, and Evin batted beautifully as well…and then Russell played a really good knock as well.

Holder added: “We had the foundation up front, I think we hit every target that we set to hit and the beautiful thing is that we had set batters in most of the time and wickets in hand to launch at the end. We have put so many smiles on people’s faces back home in the Caribbean and for me, I just want to continue to do that. I think we’re at our best when we play with freedom and a smile.”

Holder was also pleased with the bowling performance. Carlos Brathwaite was the leading wicket-taker with three wickets, while left-arm spinner Fabien Allen also bowled well to take two wickets in the middle overs – both coming via stumpings.

“I thought the bowlers were outstanding as well. To defend on such a good wicket and a small field it can be difficult and we went both sides of the park last time against South Africa. It was good to see the bowlers come back and show a lot more discipline. The plans worked well today and we want to carry this sort of performance and this level of focus into the tournament,” Holder said.

West Indies will now travel to Nottingham for their first World Cup match against Pakistan at Trent Bridge on Friday. First ball is 10:30am (5:30am Eastern Caribbean Time/4:30am Jamaica Time).