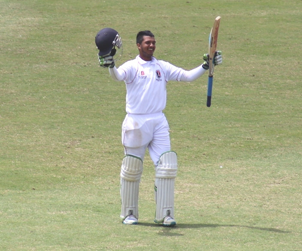 Merry Boys wicketkeeper/batsman, Amir Jangoo has become the second Under-19 player to be called up to the Red Force training squad.

He joins fast bowler Anderson Phillip in the training squad and will go straight into action in the first practice game at the National Cricket Centre, Balmain, Couva.

The Fatima College student revealed that he was elated about his inclusion into the Red Force setup after recently competing at the West Indies Under-19 Championships in Jamaica.

“When Kelvin Williams called and invited me to the Red Force training it was a feeling I could not explain to be honest. This was something I always dreamt of and it was just out of this world,” said Jangoo.

He added: “My family was really happy for me when they found out the news but at the same time they knew this is just the start. They let me know that this is the beginning of my journey and I need to put in the hard work.”

The former West Indies Under-19 player stressed that it is key for him to capitalise on this opportunity to further his cricketing career.

“I would like to go out there and work extremely hard, perform well and showcase my talent. I want the coaches to see my ability and I can do this by scoring runs and being efficient behind the stumps so the selectors know I am a long-term option,” said Jangoo.

The inclusion of Jangoo to the Red Force training squad will intensify the wicketkeeping competition. Currently, Steven Katwaroo is the Red Force’s first choice wicketkeeper with Denesh Ramdin playing when not on West Indies duty and Nicholas Pooran recovering from injury.

“I think the wicketkeeping race is very tough and the Red Force team has a top class wicketkeeper in Steven Katwaroo. It will be a very interesting competition but I am up for it and I am very motivated,” said Jangoo.

He continued: “Trinidad and Tobago has a lot of top class wicketkeepers such as Denesh Ramdin and Nicholas Pooran so there is a lot of competition, but at the same time it is about how you perform and the hard work that you put in. I think once you put in the hard work you will reap the rewards. Besides my glove work I am aiming to score runs and show my ability with the bat.”

The T&T Under-19 vice-captain revealed that he is looking forward to meeting up with Under-19 team-mate Phillip at Red Force training as they make the transition from youth cricket to the senior level.

Taken from the Trinidad Guardianr