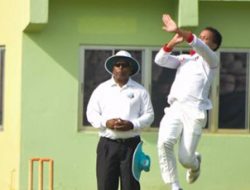 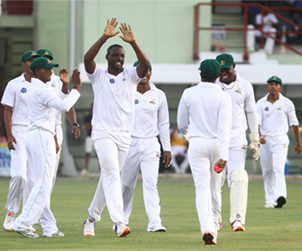 ST. JOHN’S, Antigua – There are three compelling rivalries in the fourth round of matches of the West Indies Championship, which resumes on Thursday following a two-week break.

With a mere 0.2 points separating them at the top of the table, long-standing foes Guyana Jaguars and Barbados Pride will face awkward opposition in their hunt for a bag of points to put light between each other.

• “Live” scoring of all matches is available on the www.windiescricket.com website.

• Webcasts of all matches are available on the Windies YouTube Channel and you can subscribe to receive pre-play alerts.

Jaguars, the five-time defending champions and current table leaders, will be on home soil at the Guyana National Stadium, when they face Jamaica Scorpions, a side that has shown a penchant this season for coming from behind to save matches.

Second-placed Pride, runners-up to the Jaguars in each of their title-winning seasons, will be on the road at Warner Park, where they are hosted by a Leeward Islands Hurricanes side that shrugged off a slow start to the season to win in their previous match.

And, the return to the Championship of the decorated pair of Andre Fletcher and Denesh Ramdin will further flavour an already fierce contest at Windsor Park between hosts Windward Islands Volcanoes and the visiting Trinidad & Tobago Red Force – two teams in the middle of the table with 0.2 points also separating them.

Jaguars returned to the top of the table following their third-round win on home soil over Red Force and Scorpions stumbled to their first defeat against Pride in the previous round, after twice batting from behind to earn draws.

But if there was one team that the Jags would relish playing at this stage to put the pressure on the chasing pack, it would be the Scorpions.

The Jaguars have won all but one of the 10 matches the two teams have played in the PCL era of the Championship, including all five matches at the venue for this weekend’s contest.

Scorpions can take heart in their eight-wicket victory on home soil in February last year and their seeming “backs-to-the-wall” batting this season to give them a bit of hope that they can resist their opponents, but it will be a huge task.

Jaguars welcome the return of left-handed all-rounder Raymon Reifer to give a boost to their batting and bowling. Scorpions have been weakened from the previous round with the loss of the batting talents of Brandon King and Rovman Powell to the imminent West Indies Tour of Sri Lanka.

The Jags are a settled, confident unit that know their strengths and weaknesses, but the Scorpions rebuild continues and they will require their handful of senior players, especially in the batting, to show greater stability to be able to slow down, if not stop, the home team.

• Veerasammy Permaul (Jaguars) has taken 445 Championship wickets and needs five more for 450; and

After starting the season with a loss, Pride moved to within touching distance of the top of the table, after back-to-back wins over the Jaguars and Scorpions in their two previous matches. Hurricanes got a timely boost of confidence with a comfortable victory over Volcanoes in the third round, after opening with two losses.

This could prove to be the cliched banana peel for the Pride. Though they have won six of the 10 matches between the two sides in the PCL era, Hurricanes given proof that they cannot be taken lightly, twice going onto their opponents’ turf and clobbering them.

The two sides also return to the venue, where the Hurricanes will have fond memories of narrowly failing to pull off a thrilling heist, when they were set a victory target of 312 in the 2017-18 season and their slow bowling duo of West Indies off-spinner Rahkeem Cornwall and Jamaican leg-spinner Damion Jacobs have made it difficult for opposing batsmen.

But the Hurricanes attack from the previous match has been compromised a bit with the loss of lanky pacer Alzarri Joseph to the imminent West Indies Tour of Sri Lanka. The Pride attack too, has been weakened with West Indies pacer Kemar Roach being rested and left-arm spinner Jomel Warrican sidelined with a finger injury.

On a pitch that is typically tailor-made for batting, it should be hard work for the bowlers, but it is an opportunity for the batsmen on both sides to make a big impact.

• Cornwall has taken 199 Championship wickets and needs one more to become the second Hurricanes bowler to take 200 wickets;

• Jacobs has taken 192 Championship wickets and needs eight more for 200; and

Fletcher, who has played 25 One-day and 42 Twenty20 Internationals for West Indies, has not played in the Championship since he made 13 and five for the Volcanoes against the Jaguars almost three years ago at the Guyana National Stadium.

Ramdin, a veteran of 74 Tests, 139 ODIs and 71 T20Is for West Indies, was the Red Force captain last season and led their batting aggregates, but he has not played a match this season.

They will replace Sunil Ambris and Darren Bravo, the players that led the respective teams in the previous round. They too, will be missing this weekend because of the imminent West Indies Tour of Sri Lanka, with the captaincy duties falling to Kavem Hodge for Volcanoes and Yannick Ottley for Red Force.

Having started the season strongly, Volcanoes and Red Force stumbled to defeats in the previous round against Hurricanes and Jaguars respectively, leaving them nestled in the third and fourth.

After tasting the high life in the table, neither side will want to fall further behind and will chase a big haul of points that would keep them in step with the front-running pair.

The rivalry in this match-up has been fierce in the PCL era of the Championship with the Volcanoes holding a 5-4 edge over Red Force. But the visitors have reason for hope in this match.

Last season, Red Force won the return duel between the two sides at the venue for this weekend’s contest by a whopping 190 runs and this should give them some motivation to press hard.

Two players stand on the threshold of personal milestones which could be accomplished in the match, if they are selected:

Following are the Official Points Standings in the 2019-20 West Indies Championship after the third round of matches.

Following is the list of the most prolific batsmen and most successful bowlers in the 2019-20 West Indies Championship after the third round of matches.