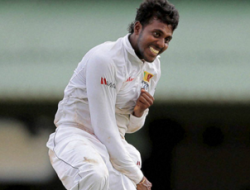 COLOMBO—West Indies cricket captain Jason Holder yesterday said that the suspension of coach Phil Simmons from the team currently in Sri Lanka was a setback for the team.

Holder, 23, who leads the West Indies in a test series for the first time in a team without top players like Chris Gayle and Shivnarine Chanderpaul, said he is hoping that Simmons returns soon. “No doubt it is a bit of a setback for us, but at this present stage all we can focus on is cricket,” he said.

“I hope the situation with him is solved, and solved quickly because we’d love to have him back. He’s been a wonderful inspiration to our team thus far.”

Simmons is suspended pending an inquiry after his criticism of selection of the limited-overs side for the Sri Lanka tour. Selection committee member Eldine Baptiste has taken over coaching responsibilities in the interim.

Meanwhile Sri Lanka captain Angelo Mathews has given his backing to spin bowler Tharindu Kaushal despite a ban for one of his bowling actions, raising the prospect of him being selected for the upcoming test series against the West Indies.

The International Cricket Council has banned Kaushal’s way of bowling a “doosra”—a ball delivered with an off spinner’s action but which spins away from a right-handed batsman—because it exceeds the level of allowed elbow flexion. However, the ICC cleared the 22-year-old Kaushal to bowl his stock ball, the off spin.

Mathews said that he and the team management hoped to rectify Kaushal’s doosra action and have it cleared as well. The two-test series between the two sides starts on October 14.

“We strongly believe that Tharindu Kaushal is a very valuable player in the side. There is no problem with his off spin and we hope to rectify his doosra and have it cleared as well,” Mathews told a news conference.