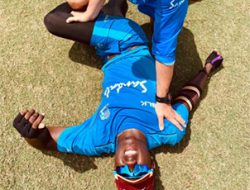 Coach Reifer Gives Thumbs Up To Training Camp Ahead... 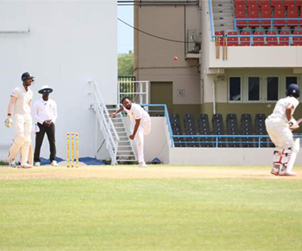 PORT OF SPAIN, Trinidad – Shamarh Brooks continued to press his claim for a place in the West Indies side for the upcoming MyTeam11 Test Series against India, which is co-sponsored by Skoda and Fena, with a second consecutive half-century for West Indies “A” in the second “Test” against India “A” on Wednesday here.

Brooks hit 53, as West Indies “A”, choosing to bat, reached 243 for five in their first innings at the close on the opening day of the match at Queen’s Park Oval.

The hosts controlled the opening session courtesy of an 87-run opening stand between Hodge and Brathwaite, who took their side to lunch on 71 without loss.

Both batsmen were ultra-cautious and eschewed aggression in favour of occupation of the crease. It meant Hodge batted 190 balls and a shade over four hours, counting eight fours and six, and Brathwaite struck three fours and six off 119 deliveries in just under 2 ½ hours.

Brathwaite perished after the lunch break, bowled by Sandeep Warrier, but Brooks joined Hodge to add a further 62 for the second wicket to take West Indies “A” to tea on 135 for one.

Brooks, who was included in the West Indies senior squad earlier this year for the England series without making his debut, once again played well in an innings lasting 98 deliveries spread over 146 minutes and including seven fours.

The 30-year-old Brooks also hit a half-century in the opening “Test” in Antigua last week.

West Indies “A”, however, suffered a slide following the resumption, losing four wickets for 47 to slump to 196 for five.

Hodge perished in the fifth over after tea, bowled by Mohammed Siraj offering no stroke, and Sunil Ambris played back to off-spinner Krishnappa Gowtham and was plumb lbw for 12.

Brooks finally departed, driving a firm return catch to Shivam Dube, and Jermaine Blackwood made a breezy 20 with two fours and a six before edging a defensive prod at leg-spinner Mayank Markande to Hanuma Vihari at first slip.

In dire need of a partnership, West Indies “A” got it courtesy of Reifer and Dowrich, counter-attacking in an unbroken 47-run, sixth-wicket stand.