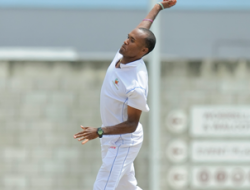 (CMC) – Reigning champions West Indies Under-19s will be part of history, when they kick off their title defence of the ICC Youth World Cup against hosts New Zealand Under-19s.

The two teams will contest the match in the first day/night fixture ever in the history of the YWC at the Bay Oval in Tauranga on the opening day of the tournament which runs from January 13 to February 3.

The Windies Under-19s, under the leadership of Shimron Hetmyer, collected their first ever youth world title last year, when they beat India in the Final of the tournament staged in Bangladesh.

The Windies Under-19s, under the leadership of Grenadian wicketkeeper/batsman Emmanuel Stewart and coached by Graeme West, have already started preparations for the YWC, winning series against the South Africans and Zimbabwe last month on the road.

The team is likely to be further fortified following the conclusion of this year’s Regional Under-19 Tournament being contested in St Kitts.

India and Australia, both three-time YWC champions, are clubbed together in Group B along with Zimbabwe and East Asia Pacific qualifier Papua New Guinea.

Bangladesh, Canada, England and Namibia comprise Group C, while two-time champion Pakistan, Sri Lanka, Asia qualifier Afghanistan and European qualifier Ireland form Group D in what is the 11th edition of the tournament and the third to be held in New Zealand.

The top two sides from each group will advance to the Super League, while the remaining eight teams will figure in the plate championship.

The quarterfinals, semifinals and the final of the Super League will be among the 20 matches to be broadcast “live”.

The plate tournament will run simultaneously, but end with the plate final at the Bert Sutcliffe Oval in Christchurch on January 28.