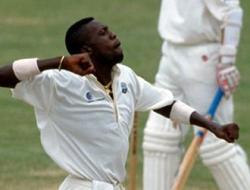 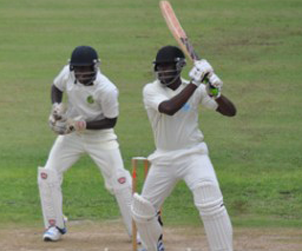 ALONG with some control of left-arm spin from Veerasammy Permaul, teenaged opener Shimron Hetmyer and middle-order batsman Royston Crandon fashioned well-played innings for Singh’s XI on the first day of their second four-day practice match at the Guyana National Stadium, yesterday.

Hetmyer made an even century while Crandon contributed 96 as Singh’s XI, who won the toss and chose to bat first, reached 311 for 5 at the close of play with Chandrapaul Hemraj, who struck Permaul for two sixes over midwicket, on 39 and Ricardo Adams yet to score, even as Permaul has so far taken 5 for 74.

At lunch, Singh’s XI were 76 for 1 having lost the wicket of Tagenarine Chanderpaul (16) lbw to Permaul at 40 for 1, even as Shimron Hetmyer and Kandasammy Surujnarine took them to the break without further loss, with Hetmyer on 39 and Surujnarine 13.

After the break, the duo increased their second-wicket partnership to 63, before Surujnarine was bowled by Permaul for 44 (7×4), followed by his skipper Vishaul Singh, who failed to negotiate one from Permaul and was palpably struck lbw for 4 at 113 for 3.

Hetmyer got to his 50 before tea, counting six fours and a six off Gudakesh Motie-Kanhai, celebrating same with an audacious drive for his seventh four off Keon Joseph, who bowled a tidy line and length along with Raymond Reifer in sultry conditions, but went wicketless.

Royston Crandon joined the boundary-hitting act with two fours back over the head of Motie-Kanhai even as Singh’s XI missed the chance to dismiss Hetmyer via run-out and at tea Singh’s XI were 198 for 3 off 55 overs with Hetmyer on 79 and Crandon 49.

After tea, Hetmyer struck Christopher Barnwell for three fours in one over, as he posted his ton which was decorated with 12 fours and one six, before he gifted his wicket away without any addition to his score, at 232 for 4, adding 119 for the fourth wicket with Crandon.

Crandon was joined by Hemraj, who proceeded to increase the runs that were there before, with Hemraj hitting the two sixes off Permaul, even as Crandon got three fours, two of them off Barnwell, inching closer to his century in the process.

A streaky four by Crandon through the slip cordon off Keon Joseph, who bowled the second new ball in tandem with Reifer, posted the 300 for Singh’s XI, before an arm ball from Permaul knocked back Crandon’s off-stump, four short of a 100 at 306 for 5, with Crandon hitting 12 fours in his 96.

He was quickly followed by Steven Jacobs, who was lbw without scoring three balls after Crandon departed, leaving Adams and Hemraj to negotiate the remaining overs to the close of play.