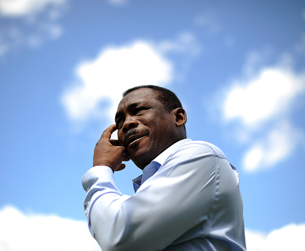 The event, labelled Legends Reunited, will see Haynes and Greenidge playing in a fund-raising golf tournament on March 17, and then attending a gala dinner the following day as guests of honour.

“We are very excited to have our special celebrity guests here in Cayman for the weekend,” said Abali Hoilett, chairman of Cayman Cricket.

“Gordon Greenidge and Desmond Haynes were a legendary partnership and it will be an honour to have them here.”

The governing body here is using the event to kick-start its development plan. With the funds from the International Cricket Council and Government proving insufficient to fuel domestic programmes, Cricket Cayman is hoping to raise funds through private events.

Commercial bank NCB Cayman has partnered with Cricket Cayman for the event.

“We are in the process of implementing a five-year development plan to revitalise cricket in Cayman,” Cayman Cricket vice-President Hector Robinson said.

“The aim is to start with the support and development of cricket at youth level, and further down the line to achieve performance at senior level.

“The funding we receive from the International Cricket Council and Government is not enough to allow us to fully implement our development plan, so we are calling on the private sector to get involved and support us.”

Haynes and Greenidge formed the most successful opening partnership in Test history, amassing over 6,000 runs and 16 hundred-run partnerships.