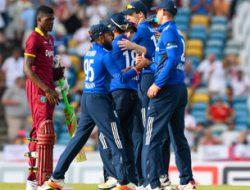 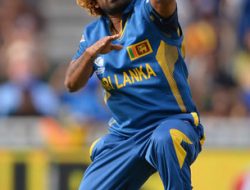 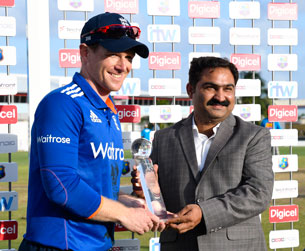 Centuries from Alex Hales and Joe Root powered England to a record victory in the third and final ODI against West Indies in Barbados.

The result – the fifth-largest victory in runs terms that England have ever achieved in ODI cricket – means England, who won both the first two ODIs in Antigua, have taken a 3-0 clean-sweep of the series despite losing the toss in every game. It is the first time England have done that since 2003 (in Bangladesh), the first time they have whitewashed West Indies in an ODI series in the Caribbean and the heaviest defeat, in terms of runs, West Indies have ever suffered at home.

For a team with such a proud history to be defeated so overwhelmingly at what is generally regarded as their spiritual home will hurt throughout the Caribbean. It will also do West Indies’ chances of qualifying automatically for the 2019 World Cup no good at all. Currently ranked ninth, they must break into the top eight before the end of this September.

It was the second-wicket stand between Hales and Root that laid the foundations for this win. The pair added 192 in 30.3 overs with Hales, on his comeback to the side having recovered from a hand injury, recording the fifth century of his ODI career and Root the ninth. Only Marcus Trescothick (with 12) has scored more ODI centuries for England than Root, while Hales (in his 39th innings and 41st match) broke David Gower’s England record (43rd innings and 45th match) as the fastest man to record five ODI centuries.

Hales’ century vindicated the England management’s faith in him. Only added to the ODI squad a couple of days ago – he missed out on original selection due to the injury he sustained in India – he was drafted back into the side despite not having batted since January 19, which was hard luck on Sam Billings following his promising performances as his deputy.

Not for the first time this series, though, West Indies will rue a couple of missed chances. Root was dropped on 1 and 12, with the first chance – offered to Evin Lewis at midwicket – relatively straightforward by international standards. Lewis was slightly slow to react to the ball and, diving forward late, was unable to cling on to the chance after his elbows crashed onto the turf. Alzarri Joseph was the unfortunate bowler.

The second chance was tougher. Ashley Nurse, a solitary slip but positioned about where fourth slip would normally stand, made good ground to his right but again was unable to cling on to the chance as his hit the ground. Jason Holder was the unlucky bowler on that occasion.

Batting was not easy for much of the day, but especially in that first hour. Put in on a surface that might have started just a touch damp – it was the third game in succession in which Jason Holder had won the toss – England’s batsmen initially struggled to find their touch on another two-paced pitch offering variable bounce. Jason Roy drove to mid-off and, after 10 overs they had made just 39 for 1.

But, as in Antigua, England recognised that conditions would improve and gave themselves time to make up for the slow start. Hales, demonstrating not just his power but his shot selection and temperament, gave himself time to adjust to the conditions and, as they eased and he settled, began to take control.

Hales took a particular shine to the legspin of Devendra Bishoo. At one stage, he struck Bishoo for 22 in six balls, a spell that included two fours and two sixes, forcing Holder to withdraw him from the attack and use part-time bowlers such as Kraigg Brathwaite and Jonathan Carter instead.

It was a ploy that almost worked. Hales was adjudged to have been leg before to Brathwaite on 93 but called for a review that suggested the ball would have drifted on past the off stump.

Root looked far from his best for the first part of his innings. Apart from the two chances, he took 17 balls to score his first three runs and was grateful for a misfield from Kieran Powell, at cover, which gifted him a boundary and helped relieve the pressure upon him. Unable to trust the pace of the ball, though, on another slightly two-paced surface, he picked up all his boundaries with cross-bat strokes – sweeps or pulls generally – with his only two attempts to hit boundaries down the ground resulting in one edge for four and, ultimately, his dismissal, caught at long-on.

Once the pair were parted, though – both fell to outfield catches as they tried to accelerate – England’s innings fell away. Joseph, playing in place of the injured Shannon Gabriel, finished with four wickets (albeit for 76 runs) as reward for his pace and persistence, and Holder claimed three as England lost their final nine wickets for 109 runs. They lost their final wicket, a run-out where both batsmen ended up at the same end, from the final ball of the innings. Still, Morgan later suggested a part score might have been “between 220 and 240” so England were well over.

“We came here to win three games, and we’ve won three games,” he said. “I think probably the strongest thing we’ve gained from this trip is adapting to conditions.

“I still maintain we can score 300 on most wickets and today has probably proved that. It was probably our best batting performance of the series – simply because I thought conditions were a lot more difficult than we’ve come up against.

“We might have defended 200, maybe 220, if we’d bowled as well as we did. When it’s up and down like that, we could easily have lost three wickets early.

“I’m not a huge fan of early starts anyway. You can lose the toss and lose early wickets, and in the afternoon it can be beautiful. So it can be quite lop-sided. I’m more of a fan of when conditions are even for both sides.”

Not for a moment did West Indies seem likely to chase down their target. Powell fell in the first over, lofting an easy catch to square leg as he mis-timed a turn to leg, before Lewis top-edged an equally simple catch back to the bowler having been beaten for pace as he attempted to pull. Kraigg Brathwaite, pushed down to No. 3, then clipped another simple catch to midwicket.

Liam Plunkett, obliged to undergo a fitness test before play to prove he had recovered from the sickness that kept him out of training on Wednesday, all but ended the contest with an opening five-over spell of 3 for 5. He bowled Jason Mohammad with the first ball of his spell and then ended Shai Hope’s patient innings with a slower-ball that was clipped to square leg and, next ball, produced a beauty that nipped in and took the edge of Holder’s on its way to Jos Buttler.

Woakes, who finished with 3 for 16 from eight immaculate overs, was named man of the series after another impressive performance.

While Carter averted a record-breaking margin of victory, no-one else in the side could contribute even 20 as West Indies were bowled out with 64 deliveries of their innings left unused. It meant they had been bowled out within their 50 overs in every match of the series and represented the biggest defeat (in run terms) of their ODI history against England and their third biggest against anyone, anywhere.