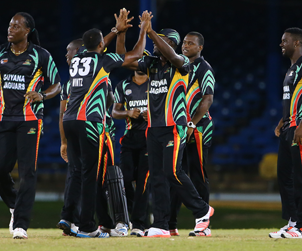 WITH just five days before the 2017 NAGICO Regional Super50 tournament bowls off, former Demerara Cricket Club (DCC) and Guyana middle-order batsman and head coach, Mark Harper, believes that the Guyana Jaguars have an excellent chance of winning the coveted trophy.The 59-year-old Harper, who played the last of his 42 First-Class and 13 Regional Limited Overs matches in 1991, is of the opinion that the team’s all-round ability will be a huge positive for the side.

“I think Guyana have a good chance. When you look at the squad, we have a good all-round squad, a squad with good experienced players, who have been playing the game for some time now,” Harper pointed out.
The Guyana Jaguars have been labelled as the pre-tournament favourites, but that label means nothing unless it can be backed by strong performances.
However, the former Bermuda national coach pointed out that execution will be the key for any strong performances.
“In limited overs cricket or any form of cricket you have to bat well, but having said that the team’s bowling department is well equipped to handle any situation.
“Beaton (Ronsford) is back, and he will add a bit of pace, then there is Barnwell (Christopher), Reifer (Raymon) and Wintz (Paul), but our spinners … Guyana have always produced quality spinners, and with Bishoo (Devendra), Permaul (Veerasammy) and Jacobs (Steven), our bowling department is well equipped,” Harper added.
Meanwhile, Harper expressed his surprise at the omission of middle-order batsman Vishaul Singh from the touring squad.
“I’m surprised he is not in the squad. He is a quality player,” Harper said.
Singh, left-arm spinner Gudakesh Motie, fast bowler Romario Shepherd, opening batsman Kevon Boodie and all-rounder Royston Crandon were all omitted. The five players were part of the squad last year.
The squad includes seven players who have represented the regional side in Tests, One Day Internationals (ODIs) and Twenty20s.
The left-handed Leon Johnson is once again at the helm, and he will have a bunch of experienced players to call on, among them is middle-order batting stalwart Shivnarine Chanderpaul.
When the action bowls off, the Guyanese will be aiming for a 10th Regional 50-over title, the last of which was achieved in 2005 when they defeated Barbados in near darkness in the final of the KFC Cup at the GCC ground, Bourda.
Prior to that, Guyana reigned supreme in 1980, 1983, 1985, 1993, 1995, 1998, 2001 and 2003.
The Guyana Jaguars will do battle in Group B of the Super50 which runs from January 24 to February 18 in Antigua and Barbados.
Group B comprises last year losing finalists Barbados Pride, Combined Campuses and Colleges Marooners, Jamaica Scorpions, Guyana Jaguars and ICC Americas.
Meanwhile, title-holders Trinidad & Tobago Red Force, Leeward Islands Hurricanes, Windward Islands Volcanoes, the West Indies U-19s, and visiting English County Kent Spitfires have been installed in Group A.
The Guyana Jaguars squad reads: Leon Johnson (captain), Veerasammy Permaul (vice-captain), Anthony Bramble (wkp.), Shimron Hetmyer, Shivnarine Chanderpaul, Christopher Barnwell, Raymon Reifer, Rajendra Chandrika, Steven Jacobs, Assad Fudadin, Devendra Bishoo, Ronsford Beaton, Paul Wintz and Jonathan Foo.
Management Staff: Esaun Crandon (head coach), Rayon Griffith (assistant coach) and Ernesto Gonzalez (physiotherapist).