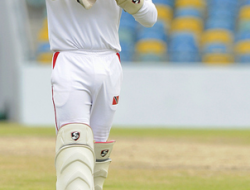 WEST Indies Test opener Leon Johnson and his Georgetown Cricket Club (GCC) teammate Vishaul ‘Cheesy’ Singh have been named captains of the two sides which will contest the first four day practice match for the Guyana Jaguars unit, commencing from today at the GCC ground.Johnson’s XI will also have within its ranks, dependable Guyana and West Indies middle order batsman Shivnarine Chanderpaul, along with members of the Guyana Jaguars who were retained and drafted two weeks ago for the first ever West Indies Cricket Board Professional Cricket League, which bowls off on November 14th with the Jaguars facing the Leeward Islands franchise.

Only Chanderpaul’s eldest son Tagenarine Chanderpaul and Singh is not included in Johnson’s side from the Guyana Jaguars’ 15 man squad that was drafted along with Barbados’ Raymond Reifer who will arrive in the country sometime this weekend, while fiery fast bowler in Jeremy Gordon forms part of Singh’s team, along with Raun Johnson, another tall fiery fast bowler.
The game is set to start at 09:30hrs weather permitting and all players listed below are asked to be at the venue for 08:00hrs sharp.