June, 21, 2022 will mark the 47th anniversary of West Indies winning the inaugural International Cricket Council Cricket World Cup 1975. To confirm that June will always be a very special month for WI cricket, its players, current and past, and supporters, will also celebrate, on June 23, 2022, the 43rd anniversary of West Indies repeating that initial 1975 ICC CWC triumph, also winning the second stanza, ICC CWC 1979.

These are still the only West Indies ICC CWC successes ever. For West Indies, the month of June will always hold exceptional, even unique memories and superlatives in ODI cricket. Colin Croft, the former West Indies fast bowler, was a member of the 1979 team which won in great style at Lord’s. Today we feature Part 1 of his article which recalls the historic achievements. On Thursday, June 23 we will feature Part 2.

The best, or worst, game, for West Indies, depending on perspectives, of 1975’s tournament, had to have been that nail-biting sensational win, versus Pakistan, always WI’s nemesis, both teams always similarly equipped. Pakistan batted first, compiling a workman-like 266 – 7 (60 overs); with useful innings from Majid Khan (60); captain Mushtaq Mohammed (55); and Wasim Raja (58).

West Indies were immediately in serious trouble; 36-3; with Sir Gordon Greenidge, Roy Fredericks and Alvin Kallicharran dismissed. That soon deteriorated to 145-6, then 203-9, with last pair Deryck Murray and Sir Andy Roberts at the crease, as Pakistan’s big fast bowler, Safraz Nawaz, homed in for the kill. With brilliance, luck, temerity and cheekiness, Murray and Sir Andy overcame Pakistan. Somehow, they put on the required 64 runs for that unfinished last wicket, the pair scampering that last, winning run, to take WI to 267-9, with two deliveries remaining (59.4 overs), as if their very lives depended on that run.

Sir Clive made 53, Murray a match-winning, face-saving 61 not out, and Sir Andy 24 not out, but it was Pakistan’s powerful, effervescent fast bowler, Safraz Nawaz, one of the first recognized purveyors of “reverse swing”, bowling brilliantly; 4-44 (12 overs); who was named “Man-of-the-Match,” also one of the very few times, in ODI and T20 histories, when a losing player had, very deservedly, merited a “Man-of-the-Match” Award.

Days off from studies for ICC CWC 1975

Because it was the first such tournament, and WI were joint favorites, with Australia, everyone who listened to, or saw, that tournament, would suggest that they remember exactly where they were when WI beat Pakistan at Edgbaston, Birmingham, home of Warwickshire CCC, on 11 June 1975. What a game!

As for me, I was in Chaguaramas, Trinidad & Tobago, studying Navigation and Air Traffic Control, to augment my initial training in Guyana, as an Assistant Air Traffic Controller. Since that game started at 7am T&T time, (11am UK time), no one had any classes that fateful day, with that game ending at 8:30pm in Birmingham (4:30pm in T&T). We were all quite tired afterwards, from the excitement, elation, the ‘nervousness’ and stresses, of that tremendous West Indies qualification for the first ICC CWC Final. 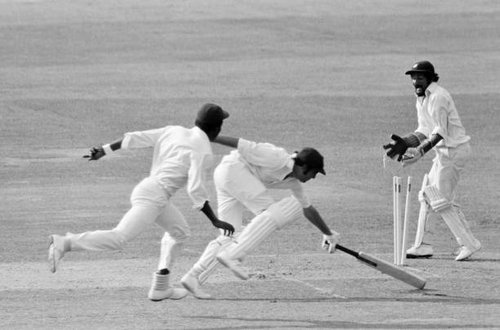 Sir Clive and Rohan Kanhai, WI Captains both, come good in the Final of ICC CWC 1975

West Indies batted first, and again were in deep early trouble; 50-3; with Roy Fredericks, Alvin Kallicharran and Sir Gordon Greenidge back in the pavilion. Nothing is really new in the annals of West Indies cricket. Sir Clive, and Rohan Kanhai, the man Sir Clive had replaced as West Indies captain, but whom Sir Clive had staunchly insisted must be included into West Indies’s ICC CWC 1975 team – a captain’s pick – then battled like real veterans.

Ironically, another former West Indies captain, Sir Gary Sobers, was also consulted about his possible inclusion in ICC CWC 1975. Sir Gary had played his last Test in April 1974, but his inputs had been so highly favored, that he had been asked to come out of retirement for that first world tournament. Unfortunately, Sir Gary negated that request, citing uncertainty about his full fitness to complete that first ICC CWC in 1975.

In the final, Sir Clive made a swashbuckling “Man-of-the-Match” 102, Kanhai also showing excellent temperament for 55, as the pair put on 149 for the fourth wicket; WI getting a creditable 291 – 8 (60 overs). Gary Gilmour, Australia’s left-handed medium-paced swinger, after earlier befuddling England with a devastating 6-14; England all out for 93 in their semi-final; was at it again, versus the West Indies, ending with 5-48.

West Indies had won that very challenging, very first ICC CWC 1975 Final, by just 17 runs. The crowds swarmed Lords cricket ground from mostly the Tavern Stand, where most West Indies supporters had been stationed, celebrating the fact that “there is nothing like the very first time.” Win No. 1 of ICC CWC 1975!