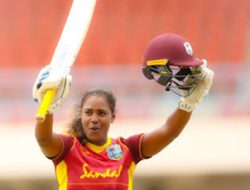 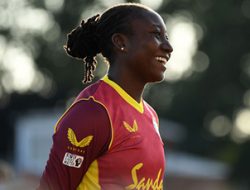 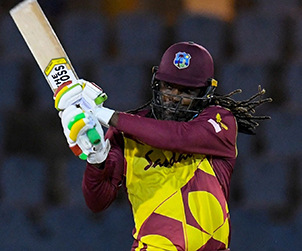 Chris Gayle smashed seven sixes and four fours as he topscored in another clinical performance from the West Indies as they won the third CG Insurance T20I on Monday night. West Indies were run-away winners for the third time in a row to clinch the series with two matches still to be played. Gayle powered his way to 67 off 38 balls as West Indies easily made off 142-4 off 14.5 overs overs in reply to Australia’s 141-6 off 20 overs. He became the first batsman to score 14,000 T20 runs as he registered his 14th T20I half-century for West Indies.

The strong left-hander looked dangerous from the start of his knock, as he hit pacer Josh Hazlewood for a six over long-on in the second over. He was particularly brutal against leg-spinner Adam Zampa, going past the 14,000-run milestone with a six in the ninth over, before he hit him for three consecutive maximums in the 11th over to reach his half-century. Stand-in captain Nicholas Pooran made 32 not out with four fours and a six as he added 67 for the third wicket with Gayle.

Earlier Australia captain Aaron Finch opted to bat first but Australia managed just 11 fours and two sixes in their score. They scored just 69 runs off the last 10 overs, three fewer than in the first 10. Left-arm spinner Fabian Allen (1-26 off four overs) and Hayden Walsh (2-18 off four overs), and veteran medium pacer Dwayne Bravo (1-17 off three overs) were superb for the home team.