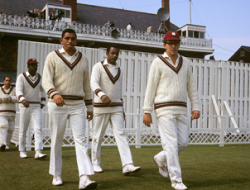 Former West Indies Cricket Board (WICB) president Ken Gordon has called on the Board to be magnaminous and allow suspended coach Phil Simmons to be with the team on its current tour of Sri Lanka.

Admitting that Simmons’ suspension was the right thing for the WICB to do, Gordon said it would be a tremendous morale booster if Simmons was allowed to be with the team in a support or advisory capacity. “We desperately need one.”

Simmons recently criticised the board for what he described as “interference from outside” which led to the omission of Dwayne Bravo and Kieron Pollard from the team on tour in Sri Lanka. He was subsequently suspended.

Gordon said Simmons’ criticism has gained wide support. “The events which followed are ironic for the board and its current president who have lost the respect of the cricketing public, have in recent times failed to take action for indisciplined behavior, from Chris Gayle on more than one occasion, conducted itself in an unprincipled and dishonest manner in its handling of the Patterson Report, demonstrated its inability to give responsible leadership …. by pussyfooting when firm and decisive action was required against the West Indian team for walking off the field in India. And now…. this board suspends Simmons for speaking out of turn.”

Gordon continued: “The really terrible irony about the current situation is that suspending Simmons was the right thing to do. Disciplinary action was required in the circumstances.”

He said Simmons’ apology spoke volumes about the man. “He now understands that as coach it was wrong to make such public criticism of the organisation he has been employed to represent. His responsibility was to fight this internally or leave. You cannot have it both ways. Without insisting on firm discipline the coach would be free to criticise the board publicly, the captain would feel free to criticise the coach and the players would be equally free to criticise the captain. In other words it would remain a matter of who can get away with what. There must be a regime of firm discipline if the West Indies team is to have any chance of turning around its fortunes. Late in the day as it comes the new executive officer is now promising that this will follow.

“The re-introduction of Simmons as coach has been an invigorating development. A former Test player, Phil is well respected and liked on all sides; he is a good leader, knows the game and has come back to us with an impressive track record earned from his virtual transformation of the Ireland cricket team.

“Fortunately, too, the board now has a further opportunity to redeem itself if it responds maturely and accepts Phil Simmons’ apology. If they can be magnaminous, even at this late stage, and make him a part of the Sri Lanka team.”