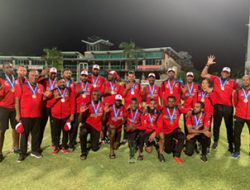 Bruce Pairaudeau, who played 13 tests for the West Indian cricket team and later captained Northern Districts to their first Plunket Shield win, has died. He was 91.

Born in British Guiana in 1931, Pairaudeau, an accomplished opening batsman, made his debut for that country when he was 15, and scored his maiden century the following season when he was 16 years and 5 months.

His career with the West Indies began in style, when he scored 115 runs against India in Trinidad in 1953. Pairaudeau, who played alongside the likes of Frank Worrell, Everton Weekes and Alf Valentine, was 26 when he made his final appearance for the West Indies during the tour of England in 1957.

It was while touring New Zealand in 1956 that Pairaudeau started having thoughts about moving Down Under. Although the West Indies won that test series 3-1, the New Zealanders had the satisfaction of recording their first-ever victory against that opponent in the fourth test in Auckland.

When Pairaudeau emigrated to New Zealand he ended up captaining Northern Districts to their first Plunket Shield victory in 1963 before retiring at domestic level in the summer of 1966-67.

In 2015 Pairaudeau and a friend drove from Hamilton to Napier to watch the touring West Indies squad train. He told Hawke’s Bay Today that he last visited his country of birth in 1998, when he attended a reunion of former team-mates in Jamaica.

“I thought I’d come meet a few of the boys and see if they knew a few of my old mates who are still alive in the Caribbean,” Pairaudeau, then 83, said.

He was also spotted discussing batting techniques with Chris Gayle, and marvelled at the weight of the modern-day cricket bat.

Philip Spooner, the West Indies media manager, said they didn’t expect Pairaudeau to visit. Upon hearing his voice and before clapping eyes on their guest, they knew they had one of their countrymen in their midst.

“We heard a West Indian voice and when I looked at who it was, I thought it might be Bruce Pairaudeau,” Spooner told ESPNcricinfo. “We knew he lived in New Zealand but we didn’t know he was coming over. All the guys just loved meeting him.”

A “casual celebration” of Pairaudeau’s life will be held at the Kaipaki ​Cricket Club in Cambridge on October 18. He is survived by son Jeffrey and two grandchildren.