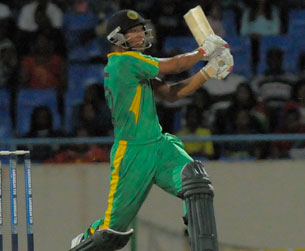 (CMC) – Jonathan Foo played a key role with the bat as Hung Hom Jaguars defeated Kowloon Cantons by 18 runs in the Hong Kong T20 Blitz yesterday.
The 26-year-old, who turned out in the recent WICB Regional Super50 for Guyana Jaguars, struck a run-a-ball 34 to help Jaguars get up to 164 for nine off their 20 overs, after being sent in.
Jaguars were struggling at 49 for four at the Mission Road Ground before Foo combined with South African Johan Botha, who made 65, to pull the innings around in an 70-run fifth-wicket partnership.
Botha faced 37 balls and struck eight fours and two sixes while Foo carved out three fours and a six.
West Indies all-rounder Darren Sammy failed with just three.
In reply, Cantons were restricted to 146 for seven off their 20 overs with West Indies right-hander Marlon Samuels stroking 22 from 21 balls and opener Dwayne Smith getting 10.