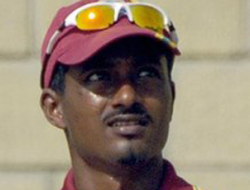 West Indies’ bowlers delivered tight lines and intelligent variations of pace on a slow Khettarama surface to force a Sri Lanka collapse and prise a 23-run victory to end an otherwise barren tour. Dwayne Bravo collected four wickets, and Ravi Rampaul three, in the visitors’ defence of 162 for 6 which, like their bowling, had also been a collective effort.

The victory gives West Indies a share of the series, though Sri Lanka keep the top T20 rank. Bravo, who hit a run-a-ball 31 in addition to his 4 for 28 with the ball, was named Man of the Match.

Tillakaratne Dilshan struck his second fifty of the series but – although his own strike-rate was nearly 137 – his 70-run stand with Shehan Jayasuriya drew some of the momentum from Sri Lanka’s innings. Jayasuriya was out for 30 off 32 balls. His wicket set in motion a capitulation that cost nine wickets for 46 runs. Incoming batsmen attempted to hit out immediately, mindful of a climbing required rate, but managed only to find secure pairs of hands in the outfield.

Jayasuriya was scoreless off his first seven balls and, although he struck successive fours off Jerome Taylor, he slipped into a pattern of finding fielders with his big shots. Dilshan also misread the pace of the ball off the pitch on occasion, and West Indies continued to squeeze in cheap overs through the first half of the chase. When Jayasuriya was dismissed – thanks to an outstanding running catch from Andre Russell at the long-on boundary – Sri Lanka’s required rate was nearing 10.

Dinesh Chandimal was almost caught at the leg-side boundary first ball, but was securely held immediately after. Dilshan was out switch-hitting Rampaul in the same over, and Angelo Mathews was caught trying to clear the backward square leg boundary not long after that. From then on, Sri Lanka lost at least one wicket per over. Chamara Kapugedara was caught at cover. Milinda Siriwardana was stumped running at Sunil Narine. The hosts had unraveled definitively by the middle of the 18th over.

This was after their own bowlers had withstood brief charges from Johnson Charles and Denesh Ramdin, who both hit 34 at either end of West Indies’ batting effort. The visitors had warmed up slowly, hitting only 17 from the first 26 balls, until Charles ignited the innings with a four-ball sequence that brought 22 runs. Charles ran at Sachithra Senanayake twice to lift him into the leg-side stands, and swept him twice as well, collecting a six and a four. The next over from Dushmantha Chameera was equally expensive. Andre Fletcher struck three fours as Chameera erred down the legside – though he also had Fletcher dropped off a slower ball, on 16.

With 44 runs having come off the last two Powerplay overs, West Indies appeared to be surging. Siriwardana’s left-arm spin quickly brought the hosts some control. He trapped Fletcher in front with a slider, saw Marlon Samuels run-out later in that over, then struck again with his arm ball to have the visitors 75 for 3 after nine overs.

West Indies attacked intermittently after that, but had their salvos briskly shut down. Andre Russell was dismissed in the 12th over after two sixes had come in the previous five balls. Ramdin cracked two sixes and a four in the 14th and 15th overs, but was soon forced to contend with a stream of good yorkers – particularly from Nuwan Kulasekara – which he could only dig out for singles or twos.

Sri Lanka’s seamers were pinpoint at the finish. Although opposition hitters were at the crease, Malinga conceded only five runs in each of his last two overs, and Kulasekara no more than seven from his. Ramdin remained unbeaten at the end of the innings.