PCL can fill development void left by shift in... 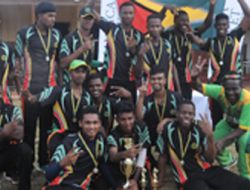 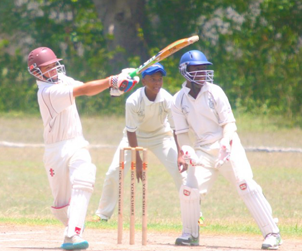 Combermere wrapped up victory by an innings and 114 runs over Harrison College during their semi-final encounter played at Friendship.

Resuming the second and final day, Harrison College needed to score 170 runs or more to make a contest out of the match but were bowled out for 56 runs in their second innings.

The defending champions set their foundation on the opening day yesterday when they won the toss and dismissed Harrison College for 28 in the first innings. In response Combermere in their first innings posted 198 all out from their allotted 35 overs to take a lead of 170 runs.

Speaking to Barbados TODAY, Combermere captain Zidane Clark said they intended to take their winning momentum into next Tuesday’s final.

Clark said that since his return from Guyana where he along with their strike bowler Persaud represented Barbados in the under-15 competition, the Combermerians were back to full strength.

“Firstly I thought Combermere bowled and batted well in this semi-final and we intend to take that momentum into the finals. Both of the senior players were out which included myself and Indal but when we came back the team was back to full strength and even more motivated,” said Clark, who is looking forward to the finals against Queen’s College.

This is Combermere’s eighth final and Clark believes once his team can produce an all-round team effort they can capture what will be there fifth straight title.

Harrison College resumed their second innings on five for one after opener William Gordon went bowled for a duck just before played ended on the opening day yesterday.

Fellow opener Harley Moseley and captain Jonlhi Jordan were fresh at the crease for Harrison College on day two. The pair had a great task ahead of them but Moseley went trapped lbw to Persaud for two, which did not help Harrison College’s cause. The spinner ended with figures of four wickets for 15 runs that came off 13.4 overs and included seven maidens.

Number four batsman Hayden Hart came out and found the going tough during his unbeaten knock of 27 that came at a very slow run rate. He faced 107 balls and struck two fours but despite Hart’s efforts wickets continued to fall at the other end.

Jordan was the third man to go caught Romi Holder off a slower delivery by danger man Persaud. Ahijah Hill joined Hart and they worked the ball around for just a very short before Hill went for six, caught Holder at deep mid-wicket off the bowling of off-spinner Nicholas Austin.

Leonard O’Garro came in and did not last long; he was bowled for one by all-rounder Mathew Forde off a ball that cut back. Forde also uprooted the stumps of Jabari Hunte who also made just one. Decarai Taylor at number eight was unable to handle the spin and was bowled by Nathan Goddard-McCarthy for a duck.

At that stage the score was 54 for seven and after two runs were added, number nine batsman Tor Burrowes was excellently run out from point by Holder who had a great day in the field. The last two wickets fell with the score still on 56 as Kaleb Gibbs at ten was brilliantly caught behind by wicketkeeper Jonathan Douglin off Persaud for a duck and the last man Joshua Griffin was also bowled by Persaud for a duck.

Over at Desmond Haynes Oval, the game between Queen’s College and the Alleyne School ended in a draw. Queen’s College won the toss and made 168 for seven from their allotted 35 overs thanks to a outstanding 103 from Nico Reifer that included ten fours and two sixes off 100 balls.

In reply Alleyne were bowled out for 116 in 34 overs to give Queen’s College a first innings lead of 52 runs. Batting a second time on the final day Queen’s College made 151 for three off 61.1 overs as the game ended in a draw.