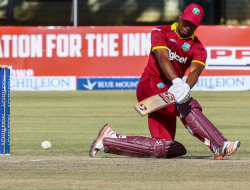 Jason Holder was left ashen faced after his side made a hash of what should have been a comfortable chase against Zimbabwe in the Bulawayo leg of the tri-series. Knowing a victory will ascertain their place in the final of the series should serve as ideal motivation when West Indies take on Sri Lanka at the Queens Sports Club in Bulawayo on Wednesday (November 23). That they’ve already bested this depleted Sri Lankan side once in the series already should give West Indies an additional boost in the contest.

But, besides the prospect of short-term tournament gains, lie more pressing matters for West Indies. These include ranking points and an automatic berth to the World Cup. West Indies, currently ninth on the rankings table, have a little over 10 months, until the end of September next year, to climb up to become a top-eight team. After their current ODI assignment, they have two series, featuring eight ODIs (home and away) to play against England sandwiched by the Champions Trophy before the cutoff date. Any advantage gained out of this series, with defeat of the higher-ranked Sri Lanka, will be worth its weight in gold.

Sri Lanka have an eye on the forthcoming series of South Africa and at heart, this tri-series, without any World Cup qualification threats, is being looked as a mere testing ground from where prospects make the transition to the first choice side. But the tournament has done little to get those in the island nation to stand up and take notice as far as bench strength is concerned. It hasn’t been the best auditioning exercise – One easy win, one abject surrender and a washed-out encounter has left the prospects with one final chance (not including the final) to make a mark and in the process, ensure qualification to the tournament final.

What to expect: Mostly Sunny with a high of 31 degrees Celsius. Rain cannot be ruled out completely despite its absence in the forecast. As evidenced on Monday, the lack of drying facilities means a small shower will be capable of washing out the contest.

Sri Lanka are unlikely to change the eleven that they named for the washed-out clash against Zimbabwe. With the surface in Bulawayo expected to take turn as the game progresses, Sri Lanka could also throw in Lakshan Sandakan beside Dasun Shanaka, who was drafted in for the Zimbabwe match.

Like Sri Lanka, West Indies’ middle-order has been hit and miss. But in Shai Hope and Kraigg Brathwaite they have two young batsmen who offer a lot of promise heading into a tricky phase of ODI cricket. West Indies could consider the inclusion of Sunil Narine to bolster their own spin attack ahead.

“In the batting department, we have a lot of work to do,”

– Upul Tharanga kept it simple when asked about his team’s areas of improvement.

“We need to do better in tight situations, but it is a young side and hopefully we will learn. It is up to the guys to learn from mistakes”

– Jason Holder wasn’t pleased his side failed to close out the game against Zimbabwe on November 19.