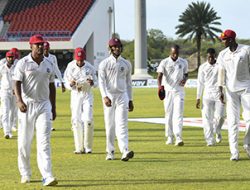 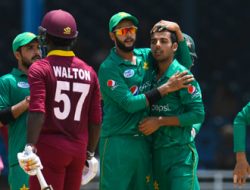 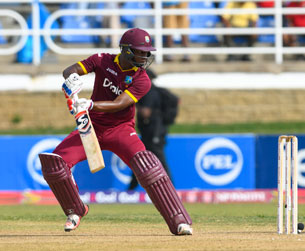 This was the batting performance everyone was waiting for from the world champions. West Indies had only 138 to chase down, but it was still five runs more than the target they couldn’t get to two days ago. But, making sure those bad memories didn’t well up, and more importantly that the series stayed alive, was opener Evin Lewis. The 25-year-old smashed his first T20I fifty – he already has a hundred – countering everything that was thrown at him. Perhaps the only thing he wasn’t tested against was scoreboard pressure, because Pakistan didn’t have any to apply. Their batting underwhelmed so much that they lost two wickets in the first over and suffered five single-digit scores.

In the chase, because West Indies’ batting seems like a chocolate eclair right now: solid on the outside, but gets all gooey in the middle. And when Chadwick Walton fell in the second over, Pakistan were starting to lick their fingers. Then came two successive fifty partnerships. Lewis led both of them, putting on 56 runs in 40 balls with Marlon Samuels and 76 off 40 with debutant Jason Mohammed.

The men who won it

Man, actually. Lewis, standing tall and smashing sixes like the legends of old. There were nine in all – one of them brought up his half-century – and each of them was an event. The flourish of the bat, the arch of the back, the sheer power and the disdainful look. He finished with 91 off 51, the highest score by any batsman against Pakistan in T20Is and his lasting 14.4 overs in the chase completely nullified Shadab Khan‘s impact. Until this match, the 18-year old legspinner had taken seven wickets at an average of 3 and strike-rate of 6.8. On Saturday, he went for 38 runs in 3.5 overs, 25 of which came off Lewis’ bat.

Moment of the Match

It was the start of the 13th over of the Pakistan innings. Facing it was Kamran Akmal. He had helped steady the team after a dramatic wobble and was on 48 off 36 balls. The full toss that Marlon Samuels bowled should have been reward for all the good work he had done until then. But it ended up dismissing him, as he pulled straight to Lendl Simmons at deep midwicket. West Indies took control from that point on, picking up six wickets and conceding only 45 runs in the last eight overs. Kesrick Williams’ slower offcutters – rather similar to Mustafizur Rahman’s – were vital towards the end, having been set up by Samuel Badree‘s 2 for 22 earlier.

West Indies’ seven-wicket victory, with 5.1 overs to spare, meant the fourth and final T20I on Sunday becomes a decider. If the hosts win it, they level the series. Otherwise, Pakistan get to take home the trophy.