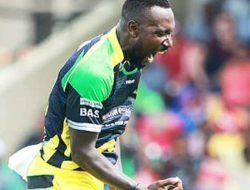 DUBAI—Bowling coach Roddy Estwick believes the disruption at the helm of the West Indies Twenty20 side had some impact on the players but has backed them to deal with the changes professionally and “carry on as normal.”

Last month, two-time World Cup-winning captain, Darren Sammy, was axed from the squad and he was followed by head coach Phil Simmons, who was sacked last week as players prepared to depart the Caribbean for the three-match T20 tour starting here Friday.

“Like anything it has a little bit of effect but they are professional sportsmen, they know that these things happen in sport where you lose a captain or you lose your coach and you’ve got to get on, you’ve got to buckle down,” said Estwick, who replaced Sir Curtly Ambrose in the post last June.

“There are little technical changes with different coaches coming and different captains coming in but they are well-paid professionals, they are highly-skilled professionals so they are adjusting and they carry on like normal.”

Sammy’s axing created a firestorm of controversy as it came five months after he guided West Indies to an unprecedented second T20 World Cup title in India.

The St Lucian all-rounder was widely viewed as an inspirational leader who commanded the respect of his players, and the decision to remove him resulted in protests on the opening day of the St Lucia Test against India last month.

Simmons, meanwhile, suspended by the West Indies Cricket Board last year over controversial comments regarding team selection, lasted just 17 month in the position before he was booted out for what the board termed “differences in culture and strategic approach.”

Choosing to sidestep the question on whether the constant upheaval would hamper the team’s development, Estwick said he was focussed on executing his role as best he could.

“I’m not a politician, I am a professional coach and that’s my job. My job is to work with players. I tend to leave anything [else] outside,” he told reporters.

“I don’t focus on anything that I have no control over. The control I have is over the players and making sure their preparation is spot on, make sure they work hard, make sure there is unity in the camp and those are the things I try and do well.”

West Indies face Pakistan on Friday in the first of three Twenty20 Internationals but with a side without stars like Sammy, opener Chris Gayle, all-rounder Andre Russell and batsman Lendl Simmons.

It means West Indies have included the likes of the uncapped Nicholas Pooran, Rovman Powell and Kesrick Williams and Evin Lewis, but Estwick said the growth he had seen in the younger players augured well for the future of West Indies cricket.

“I’ve worked with all these young players right through their careers coming through the Under-19s so it makes my job a little bit easier,” he explained.