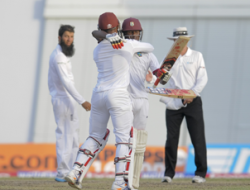 ST JOHN’S—England’s Test tour of the Caribbean earlier this year proved a financial success, grossing US$73.2 million across the region, the West Indies Cricket Board announced on Wednesday. In a release, the WICB said the result of an Economic Impact Assessment had shown that the three Tests, which were played between April 13 and May 3, had realized a real “economic impact” of US $59.8 million.

“The key outcomes of the Economic Impact Assessment which was conducted during the England Tour of the Caribbean earlier this year revealed that the region, as a whole, largely benefitted from hosting the three Tests,” the WICB said.

According to the report, the tour also pulled in 15 660 unique visitors, including 3 150 who used tour packages. In an analysis of the West Indies as an advertising brand, the report showed that there were “1 477 verbal mentions of West Indies as a ‘brand’ counted, generating a media value of US $1.1 million.”

The report also showed that of the host venues for the Tests, Antigua received the largest amount of brand exposure with 40 per cent while Grenada gained 39 per cent. However, the Barbados Test which ended in three days gained only 21 per cent. The England tour historically has been the most lucrative Home Series for the region, with large numbers of visitors making the trek to the Caribbean—mostly from the United Kingdom.

Again this year, all three Tests were well subscribed as West Indies managed to pull off a creditable 1-1 draw in the series. They drew the first Test in Antigua, lost the second in Grenada by nine wickets before rebounding to win the final game at Kensington Oval in Barbados by five wickets.

Meanwhile the Board has hired the United Kingdom-based company Pitch International in a multi-year deal to develop and implement a new commercial strategy, with the aim of boosting the organisation’s revenue.

Pitch International, a leading sports marketing agency, will serve as the Board’s exclusive commercial consultant and sponsorship sales agency, and have identified four objectives of the new commercial strategy.

In addition to increasing revenue, Pitch International is expected “to create a clear commercial identity for West Indies cricket, create a cost-effective marketing platform that delivers for commercial partners and [establish] a strong digital platform.”

“This is an extremely important relationship for the WICB, as we look to grow the appeal of Windies cricket on the global stage. We are excited about the opportunities our partnership with Pitch International offers and we look forward to welcoming them as an extension of our commercial team.”

The WICB said it would soon be revealing elements of the new commercial strategy. Jon Varney, partner at Pitch International, said the company was anxiously looking to the partnership.

“Our goal is to implement a sustainable commercial strategy which offers genuine regional and global marketing platforms for sponsors, and delivers long-term mutually beneficial partnerships,” he said.

“The WICB is making positive steps to return the Windies to their glory days, and we are delighted to be working with them to help grow their business.”