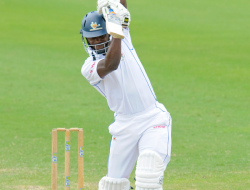 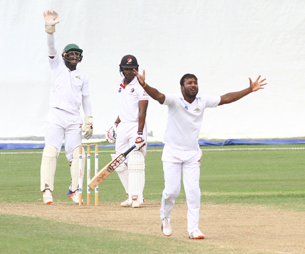 In yet another dismal showing, the visitors went down by ten wickets to two-time reigning champions, Guyana Jaguars in the fifth round encounter at the National Stadium here, a defeat which effectively left their campaign in crisis.

Red Force entered the contest – the final one before the Christmas break – rock bottom and will remain last in the six-team standings after managing 3.2 points to move to 35.6.

Jaguars, meanwhile, collected 20.6 points to move to 67.4 points, clinching their first victory since the opening round when they crushed Jamaica Scorpions.

Resuming the final day on 96 for two with a big task of saving the game, Red Force were dismissed for 235 in their second innings.

Left-arm spinner Veerasammy Permaul was once again at the heart of the attack, claiming five for 53 to end with match figures of nine for 93 while fast bowler Keon Joseph (2-38) and left-arm spinner Gudakesh Motie (2-92) finished with two wickets apiece.

Set 20 for victory, Jaguars needed only 16 deliveries to get home, with Shimron Hetmyer stroking an unbeaten 17 from 15 balls with two fours and a six.

Still requiring a further 120 runs at the start of the day to make Jaguars bat again, Red Force were in early trouble when they lost nightwatchman Khary Pierre (5) in the fifth over of the day at 112 for three.

Hope and Mohammed then added 35 to repair the damage, raising hopes of Red Force getting something from the game.

Hope was eventually caught, hooking at Joseph at 147 for four to leave Red Force on 151 for four at the interval.

Unbeaten on 26 at lunch, Mohammed perished following a delayed resumption because of rain, caught at the wicket off left-arm seamer Raymon Reifer.

Stuttering again at 169 for five, Cariah and Ottley made a last ditch effort to rescue the game in stand of 39 for the sixth wicket.

However, once Cariah was lbw to Permaul, Red Force lost their last five wickets for 27 runs. CMC