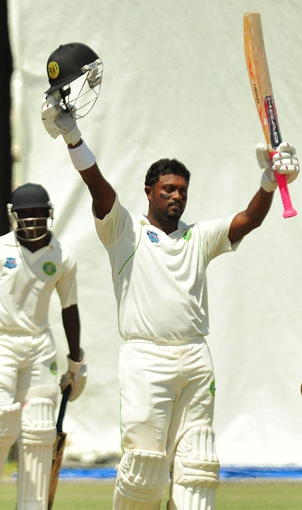 PORT OF SPAIN, Trinidad, (CMC) – Out-of-favour Test batsman Narsingh Deonarine has signed on to play for Trinidad and Tobago Red Force in this year’s Professional Cricket League, in a swap deal that will see Nkrumah Bonner heading to Leeward Islands Hurricanes.

The left-handed Deonarine, who scored over 500 runs last season representing Guyana Jaguars, declined a retainer contract with the Georgetown-based outfit and opted to enter the draft where he was selected by Hurricanes.

Deonarine’s switch to Red Force was accommodated due to the fact his wife is Trinidadian and playing for the Port of Spain franchise would allow him to spend more time with his family.

Suruj Ragoonath, chief executive officer of the Trinidad and Tobago Cricket Board, thanked all the parties involved for cooperating in the deal.

“I would like to thank the Leeward Islands Cricket Association for reaching an agreement which allows Narsingh to play for the Red Force and be with his family in Trinidad,” Ragoonath said.

“Also I would like to commend Nkrumah on being receptive to the trade and we would like to wish him a successful season with the Hurricanes.”

He added: “Narsingh is familiar with our cricketers from playing club cricket in Trinidad and Tobago and we are very excited to have him as part of the Red Force.

“I believe he will make a smooth transition into our setup and we want him to succeed with us so he can achieve his goal of returning to the West Indies team.”

The 32-year-old Deonarine will be a major asset to a Red Force side that struggled in last year’s competition and finished one from bottom in the six-team campaign.

He was one of the catalysts behind Jaguars’ victory bid, stroking 514 runs at an average of 42 with two centuries. Deonarine can also bowl off-spin and took 14 wickets last season.

“Narsingh brings a wealth of experience playing international cricket for the West Indies and First Class cricket with Guyana for the last decade. He will significantly strengthen the Red Force batting lineup and make our bowling attack even more formidable,” said Ragoonath.

“There are a lot of young and inexperienced players in the Red Force team and we believe Narsingh will be instrumental in guiding these cricketers and ensuring they are prepared at the next level.”

The PCL is set to bowl off in November.