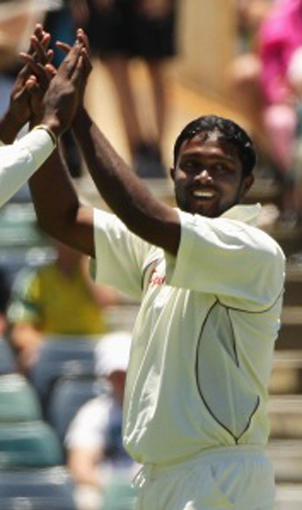 HAVING scored 139 the previous day, Narsingh Deonarine returned with the ball to claim remarkable figures of 5 for 24, as Guyana Jaguars caged the Windward Islands Volcanoes at the end of the third day of their West Indies Cricket Board/Professional Cricket League Regional four day matchup at the Guyana National Stadium yesterday.

Resuming on their overnight score of 63 for 2 with Andre Fletcher on 9 and Kenroy Peters 2, needing another 228 to overhaul the Jaguars’ 291, the Volcanoes were in a spot of within the first hour of play, when they lost three quick wickets to be 79 for 5, before being dismissed for 184.

Deonarine got support from spin twins Veerasammy Permaul who took 3 for 40 and Devendra Bishoo 2 for 66 for the Jaguars. Batting a second time after leading by 107 runs, the Jaguars were 133 for 5 at the close of play.

Andre Fletcher was the first to go, caught by Leon Johnson at slip off Bishoo for 10, followed by Sunil Ambris, who having made a debut ton against Guyana earlier in the year, failed to score when he was caught by Ronsford Beaton at mid-on off Permaul, while Peters was smartly stumped by Anthony Bramble off Bishoo for 11 at 79 for 5.

Romel Currency and Sebastien carried the score to 128, before Currency who struck two fours in his 21, was bowled by Deonarine, who also removed Lyndon James 29, at 166 for 7, 10 minutes before the lunch break, which the Volcanoes took at 176 for 7 with Sebastien on 48 and Alston Bobb yet to score.

After lunch, Sebastien got his 50 off 103 balls and 128 minutes of batting with six fours, pushing Windward Islands Volcanoes to 178 for 7, but Deonarine removed him to a catch at the wicket and later wrapped up the innings handing the Jaguars a comfortable 107 runs lead.

Despite such a cushion, they lost Rajendra Chandrika early, bowled for the second time in the match by Mervin Matthews for 9 at 17 for 1, while Assad Fudadin was lbw to Matthews for 19 at 40 for 2, in the penultimate over before the tea break which was taken at 41 for 2, with Deonarine on 1 and Johnson 10.

After the break, the pair pushed the score to 77 before Johnson who made 25, turned one from Bobb into the waiting hands of Ambris at forward short leg, followed by the wicket of Deonarine for 33 at 110 for 4, a lead of 217 with Shivnarine Chanderpaul at the other end.

The Jaguars saw Christopher Barnwell, who is expected to take over the captaincy for this weekend’s game against Barbados Pride, walking back to their den when he was bowled by Matthews for 6, 10 minutes before the close of play at 125 for 5, while they ended the day on 133 for 5, with Chanderpaul on 31 and Reifer 4.

Matthews has so far taken 3 for 24 and Bobb 2 for 30 for the Volcanoes, who will be looking to cage the Jaguars whose lead has reached 240 at the close of play yesterday, with the aim of preventing them from scoring quickly in order to press for an outright victory.