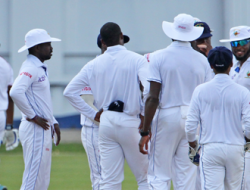 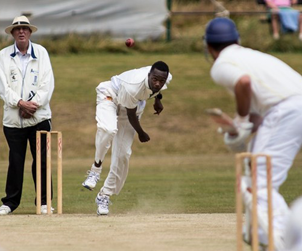 MUMBAI, India (Reuters) – Cricketers could be ‘red-carded’ by umpires and ejected from the ground for the duration of a match from next October after the sport’s lawmakers yesterday recommended on-field sanctions to address declining standards of player-behaviour.The world cricket committee of the Marylebone Cricket Club (MCC), the guardian of the game’s laws, has recommended that a player should be removed from the field for threatening an umpire, physical assault or any other act of violence.
Match officials currently report players or incidents to the match referee at the end of the day after which action is taken.
Following a two-day meeting in Mumbai, MCC world cricket committee chairman Mike Brearley said umpires needed to be empowered to impose on-the-spot sanctions, noting that there were more disciplinary problems in the lower-tier leagues.
“There was a survey done of the umpires and 40 percent said they are considering giving up the game or giving up umpiring because of verbal abuse,” former England captain Brearley told reporters at the Wankhede Stadium.
“Anecdotal evidence from people who are familiar with leagues in parts of England say that the behaviour has got worse.
“The umpires have to be respected and given the best possible chance and I think cricket is the only game in which there isn’t this possibility of an in-match punishment or deterrent.”

ROLE MODELS
The committee discussed sanctions like run penalties and sin bins but felt it would be hard to apply them consistently around the world.
“It got to the state where something had to happen to prevent those things happening on the international stage,” former Australia captain Ricky Ponting, a member of the committee, said.
“The modern players now understand their role in society, about being role models, and want to play the game the right way for younger kids.”
The committee also decided that no changes were required to the current ball-tampering laws despite recent incidents.
The age-old practice of shining the cricket ball has become a grey area for some cricketers who called for clarity after South Africa captain Faf du Plessis was declared guilty of ball-tampering by the International Cricket Council last month.
Television footage appeared to show du Plessis applying saliva to the ball while sucking on a sweet during the Hobart Test against Australia leading to him being sanctioned and losing his entire match fee.
The committee also agreed that the game had tilted too far in favour of the batsmen and therefore recommended specific bat size limitations to the edges and depth of a bat.
The new laws will be implemented at all levels of the game from October 1 next year, subject to approval by the MCC’s main committee.