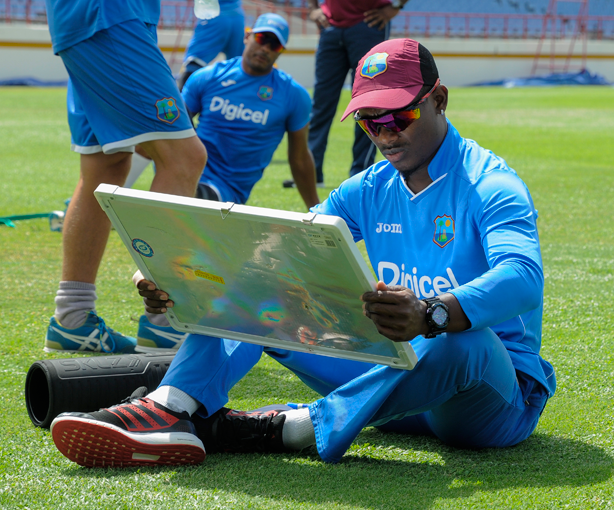 Print
The Windies limited-overs bandwagon rolls on. After a comprehensive 3-0 whitewash of Afghanistan in the Twenty20 International series, the hosts will look to continue their good run in the three-match One-Day International rubber against the Asian country at Gros Islet in St. Lucia, on Friday (June 9).
Windies, who are ranked a lowly ninth in the ODI charts with 79 points, will aim to bridge the gap between them and the eighth-placed Pakistan. Even if Windies clinch the ODI series 3-0 against Afghanistan, it won’t be easy to close the gap, as Pakistan are ahead of the Caribbean side by 11 points. The cut-off date to secure a direct qualification for the 2019 World Cup is September 30, 2017, and only the top eight teams will get an automatic berth in the mega-event.
As of now, the focal point for the Windies would be to have a settled side. Only Jason Holder, the captain, has played more than 50 ODIs. However, on a positive note, a few promising cricketers have started to press their claims in the international arena.
Roston Chase, the Barbados all-rounder, composed a brilliant ton, albeit in a losing cause in the final Test of the series against Pakistan, leading to his inclusion in the ODI squad for the three-match rubber against Afghanistan. Jason Mohammed, who composed a game-changing 91 against Pakistan in the ODI played at Providence stadium, Alzarri Joseph, Shai Hope and Evin Lewis, have also shown glimpses of their potential in the international circuit.
Afghanistan, on the other hand, will be concerned after their abject show against the Windies pacers in the T20Is. Kesrick Williams, the Leeward Islands pacer, in particular, troubled the Afghanistan camp and picked up eight scalps. However, Williams hasn’t been selected for the ODI series. Instead, Afghanistan will have to confront Shannon Gabriel, Joseph, Miguel Cummins and Holder in the 50-over series.
The visitors will depend on Rahmat Shah, Samiullah Shenwari and Asghar Stanikzai to score heavily. The trio has been in fine touch this year in the 50-over format. Among the bowlers, Rashid Khan has been in terrific form, evidenced by the 26 scalps he has bagged at an astounding average of 12.30 in 2017. His brand of googlies and straighter-ones have troubled the opposition batsmen in the recent past. Mohammad Nabi and Dawlat Zadran have also been among the wickets this season.
Intriguingly, Windies have never played Afghanistan in an ODI. So, there isn’t much of historical background to analyse the two teams. It could turn into a keen contest between the two, looking to climb up the ladder in the ODI Rankings.
When: Windies vs Afghanistan, 1st ODI, June 9, 2017 at 14.30 local time
Where: Darren Sammy National Cricket Stadium, Gros Islet, St Lucia
What to expect: Generally, December to June is known as the dry season and June onwards, persistent rain is expected to fall in St. Lucia. However, barring a stray shower, the weather looks promising for the series opener. Historically, the track is on the slower side, but from time to time, seamers have found a hint of movement to cause problems. The point is capsulised by Andrew Flintoff, James Anderson, Corey Collymore and Junaid Khan tasting success at the ground.
Team News:
Windies:
The hosts perhaps would be tempted to give the big hitting Rovman Powell and all-rounder Chase a chance. With Afghanistan struggling against pace in the T20I series, Joseph and Cummins could be added to the line-up, with Gabriel leading the attack.
Afghanistan:
With Mohammad Shahzad provisionally suspended for violating ICC’s anti-doping rule, there is a possibility of Rahmat and Noor Ali Zadran opening the batting.
Squads:
Afghanistan: Asghar Stanikzai (c), Afsar Zazai, Amir Hamza, Dawlat Zadran, Fareed Ahmad, Gulbadin Naib, Javed Ahmadi, Mohammad Nabi, Nasir Jamal, Noor Ali Zadran, Rahmat Shah, Rashid Khan, Samiullah Shenwari, Shafiqullah Shafiq, Shapoor Zadran, Usman Ghani, Karim Janat, Najibullah Zadran
Windies: Jason Holder (c), Devendra Bishoo, Jonathan Carter, Roston Chase, Miguel Cummins, Shannon Gabriel, Shai Hope, Alzarri Joseph, Evin Lewis, Jason Mohammed, Ashley Nurse, Kieran Powell, Rovman Powell