Player of the Match: Kyle Mayers

Player of the Series: Kyle Mayers

GROS ISLET, Saint Lucia – West Indies needed just over an hour to complete a resounding victory and a 2-0 series sweep of Bangladesh, and recorded their third win in five Test matches this year. A wet outfield caused by overnight and early morning rain forced the abandonment of the first two sessions, but once play started at 3pm on Monday, West Indies got down to business and quickly bowled out the visitors for 186 in their second innings. 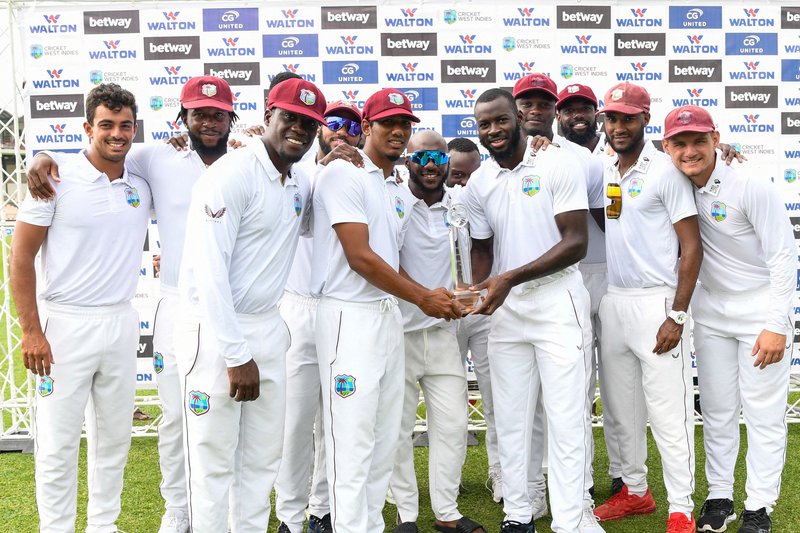 Then, openers Kraigg Brathwaite and John Campbell knocked off the 13 runs required for victory to register the second emphatic win of the series. The match ended when Campbell hit a boundary off pacer Ebodot Hossain. The victory followed up the seven-wicket triumph in Antigua a week ago, when Campbell also struck the winning run – a mighty straight six. For the home side, the series win was their second straight on the back of the result against England in March, when they captured the Richards/Botham Trophy.

“I think the confidence in the guys, especially from the first game, was high,” said captain Brathwaite. “But I was really happy with the group – [especially] the planning [and] how we went about planning and then executing. I was really happy with that, especially the batsmen.” He added: “Kyle Mayers [got] a chance to bat and I think the partnership with he and Jermaine Blackwood was superb and that really set up the game. I thought Bangladesh’s bowlers really bowled well throughout the game, the pacers and Mehidy (Hasan Miraz) obviously had a very long spell and very good [spell]. But it was good to see the fight we showed and I was proud of the boys.”

MOST WICKETS FOR THE SERIES

Starting the day on 132-6, Bangladesh were troubled by Jayden Seales (3-21) who grabbed two of the four wickets to fall, and fellow fast bowler Alzarri Joseph (3-57) to finish with 12 scalps – the most for the series.

Nurul Hasan top-scored with an unbeaten 60 which came off 50 balls. The ebullient keeper hit six fours and two sixes in a breezy knock. Mehidy, yet to score on resumption, edged a short ball from Joseph behind and Ebadot Hossain followed for a “duck”, fending off another short delivery from Seales, to be brilliantly taken by Raymon Reifer at short leg.

Seales then hit Shoriful Islam in front without scoring and John Campbell hit the stumps at the non-striker’s end from cover point to find Khaled Ahmed well short of his ground, after the last man advanced too far from his crease looking for a single.

Earlier in the day West Indies ace pacer Kemar Roach was lauded for reaching the milestone of 250 Test wickets – which he achieved on Sunday. He was presented with a fabulous commemorative memento from Cricket West Indies Vice President Dr Kishore Shallow as well as a special “250” playing jersey by fast bowling legend Sir Curtly Ambrose.

NEXT STOP… DOMINICA FOR WHITE-BALL WEEKEND!

The two teams now travel to Dominica for the start of the three-match T20I Series. This weekend will see a double header at the refurbished Windsor Park. First ball on both days is 1:30pm (12:30pm Jamaica Time). This promises to be action-packed and fans can purchase tickets via the new WINDIES TICKETS service presented by Mastercard, at www.tickets.windiestickets.com. Fans can watch live on ESPN Caribbean and listen to live radio commentary on the Windies Cricket YouTube channel.