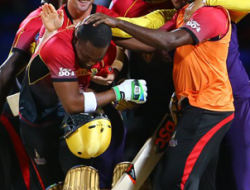 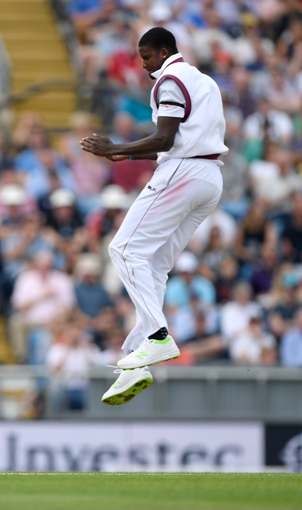 An extraordinary Test took another twist just as England were exerting their control on the fourth afternoon. Ben Stokes and Dawid Malan, with contrasting half-centuries, had carried the lead over 100 and negotiated the second new ball when Roston Chase took advantage of some poor shot selection to leave the lead standing on 188 at tea with three wickets remaining.

Stokes followed his first-innings century with a superbly complied 92-ball fifty while Malan battled his way through the morning, having been given a life on 29, to bring up his second Test half-century. The stand had reached 91 by drinks in the afternoon and West Indian heads were dropping when, from the first ball of the resumption, Stokes picked out long-off against Chase.

In his next over Chase, who again bowled considerably more than Devendra Bishoo, turned one to beat Malan’s outside edge and end his 186-ball stay. It was an innings that has probably booked his place to Australia but it had ended before it had managed to make England secure in this match. And West Indies were further back in the contest when Jonny Bairstow fell in ugly fashion by dragging a reverse sweep into his stumps.

Again, the balance of aggression and recklessness in this England side was up for debate but the depth of the order could give an escape route as a positive Moeen Ali took them through to tea with 23 not out.

West Indies had managed to nip out each of the England batsmen who were shaping to play the match-defining innings. In the morning, Joe Root fell for 72 when Shai Hope held a chance at the second attempt at gully – it was his brother, Kyle, who had spilled Root on 10 yesterday evening.

There was, though, another glaring drop to add to the list when, shortly after Root fell, Malan edged Jason Holder to first slip where Kieran Powell shelled his second of the match. In partial defence, this time significant blame had to go to wicketkeeper Shane Dowrich who dived across Powell then bailed out of the catch.

England resumed on 171 for 3 and made steady progress for much of the first hour. Root went to his second fifty of the match with two boundaries in the opening over. He was fluent off his pads whenever the bowlers strayed, but was again challenged by Shannon Gabriel before he struck in what became the final over of his spell as he cramped Root with a short ball.

Malan was forced to dig very deep, adding just 20 off 83 balls during the morning session. His first scoring shot of the day was a pleasant straight drive, but precious little else came to him easily. He narrowly evaded square leg with a flick off his hip and then the life came his way in Holder’s opening over with a very loose drive outside off.

Holder made the old ball move and there was an appearance of the lesser-spotted Bishoo in the second hour of the morning. There was some turn for the legspinner but his length was inconsistent – perhaps that was the concern Holder had, but it was hardly a fair chance for Bishoo to wait so long for an extended bowl – and Stokes put him through the leg side three times.

Stokes was especially fluent after the interval, adding to the list of the blistering drives which have studded his performance across this match. He took advantage of a tiring Gabriel with four boundaries in 11 balls, the third of the them bringing up his second fifty of the match. It was the second time he had scored a century and a fifty in the same Test, the other being against New Zealand at Lord’s, in 2015, when England managed to overturn a significant deficit.

However, the shot that brought his dismissal should not escape criticism particularly as England’s lead had yet to get out of sight. Some credit is due to the bowler, Chase, who got the ball to grip a touch out of the rough, but picking out a man on the fence first ball after a break is not a good look.

There was less blame attached to Malan’s dismissal. Earlier in the over, Chase had got a ball to jump from the rough and almost lob to point – something that will interest Moeen – and he was caught on the crease when a ball straightened to take off stump.