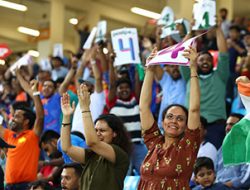 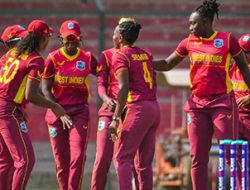 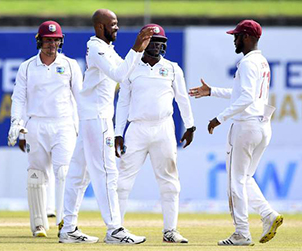 Roston Chase turned his overnight two-wicket haul into a superb five-for as he helped West Indies restrict Sri Lanka’s batting in their first innings. The tall off-spinner ended with the excellent returns of 28.5-3-83-5 as the visitors took seven wickets for 119 runs on an eventful second day, on Monday.

The home side were bowled out for 386 in the second session, but West Indies then found the going tough and closed the day on 113-6 – 273 behind on first innings with four wickets in hand. All sixwickets have so gar fallen to the spinners, who have enjoyed their home conditions. Left-hander Kyle Mayers will resume on 22 not out and with him Jason Holder on one. Mayers has so far faced 20 balls and hit five boundaries and will look to carry on the fight for West Indies.

Sri Lanka commenced the day on 267-3, and West Indies got an early strike via Shannon Gabriel in the 95th over, with Dhananjaya de Silva (61) getting out on an unusual dismissal, hitting the stumps with his bat in an attempt to stop the ball from bouncing onto the wicket.

The big wicket of captain Dimuth Karunaratne (147) soon followed as he was stumped by keeper Joshua Da Silva off the bowling of Chase. Ramesh Mendis who joined Dinesh Chandimal at the crease, too didn’t last long as an excellent flighted delivery from Jomel Warrican caught his thumb on its way into the hands of the keeper as Sri Lanka went to lunch on 341-6.

It was the fourth five-wicket haul for Chase in his career and second on foreign soil – the previous one outside the Caribbean being 5-172 against England at Manchester last year. The other five-for were 8-72 against England in Barbados in 2019 and 5-121 in his second Test against India in Jamaica in 2016.

The West Indies made a solid start with captain Kraigg Brathwaite and vice captain Jermaine Blackwood adding 46 for the first wicket. Blackwood was used at the top of the order after debutant Jeremy Solozano was ruled out the match due to concussion from a blow he sustained while fielding close to the bat on the first day. Shai Hope was the concussion substitute who replaced Solozano in the team.

The Sri Lankan spin bowlers would do damage for the hosts as tight spells from the slow left-arm orthodox pair of Lasith Embuldeniya and Praveen Jayawickrama reaped rewards. Embuldeniya struck first, when he trapped Blackwood in front of the stumps. The batsman reviewed the decision but to no success as replays showed that the ball would be crashing into middle and leg, bringing an end to his knock of 20.

Brathwaite and Hope would then steady the ship for the visitors. But the off-spin of Ramesh Mendis brought about a massive breakthrough for Sri Lanka, as his delivery on leg stump got him the wicket of the skipper Brathwaite (41).

Mendis would strike again in his very next over and in consecutive deliveries to be on a hat-trick after getting Shai Hope out for 10. Two more wickets would then fall before the close of play, with night-watchman Warrican (1) and the crucial strike of Chase (2).

The match continues on Day 3 on Tuesday at 12:30am (Eastern Caribbean Time/Monday 11:30pm Jamaica Time.