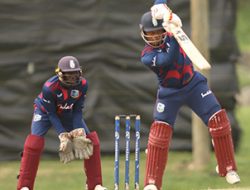 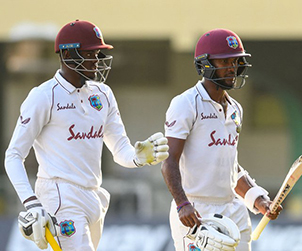 All four results are possible as West Indies and Pakistan head into the fifth and final day of the second Test on Tuesday, following an enthralling fourth day, West Indies now need 280 – more runs to win, while the visitors need nine wickets.

The home side will resume on 49-1, chasing a target of 329. Captain Kraigg Brathwaite carried his team through to the close and will re-start on 17 not out. He has so far batted just short of 90 minutes and faced 55 balls. With him is night-watchman Alzarri Joseph, who has looked solid on eight not out off 18 balls. The West Indies lost one wicket when opener Kieran Powell was run out for 23; less than 30 minutes from stumps.

Earlier in the day, fast bowler Shaheen Afridi took a career-best 6-51 as Pakistan bowled out West Indies for 150 and earned a big first innings lead of 152 The tall left-armer joined with Mohammad Abbas, who took 3-44 to be the leading wicket-takers. But batsman Nkrumah Bonner and Jermaine Blackwood formed a defiant partnership for the fifth wicket which added 60 runs before Abbas dismissed Bonner for 39.

Blackwood fell to Shaheen for 33, fending a short ball from the shoulder of the bat to Fawad Alam at gully when the West Indies were 109-7. Jason Holder led some late resistance, making 26 in just under an hour before also falling to be caught behind by Mohammed Rizwan when he edged by a full ball which moved away late and gave Shaheen his fifth wicket.

Pakistan captain Babar Azam then made a bold declaration of its second innings at 176-6 more than an hour before stumps, setting the West Indies a chase for 329 in around 130 overs to win the match and series.

In their second innings Pakistan scored at 6.4 runs per over, as Joseph took 2-22 and Holder 2-27, to be West Indies best bowlers.