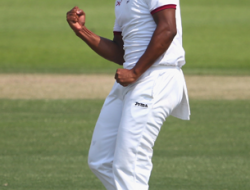 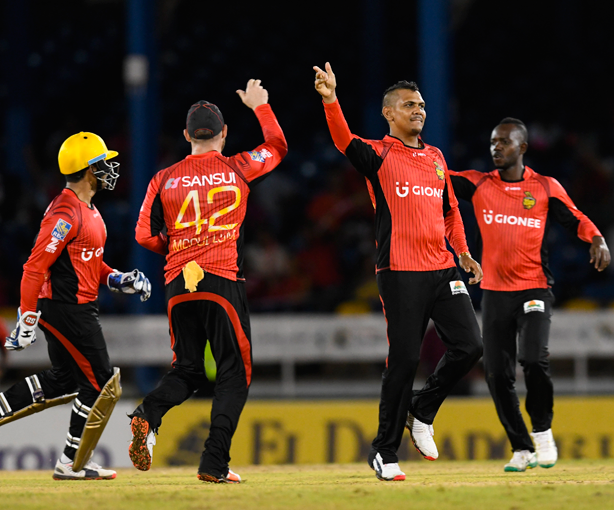 Print
In a rain-curtailed game, full of sharp twists and turns, Darren Bravo (38 off 10) and Brendon McCullum‘s (40 off 14) pyrotechnics helped Trinbago Knight Riders pull off a jailbreak as they usurped St Kitts and Nevis Patriots by eight wickets at Warner Park, on Wednesday (August 24).
After rain had stopped play for the second time in the match, Trinbago were struggling at 34 for 2 off 3.1 overs in pursuit of a target of 163 (13 overs) via the Duckworth Lewis-Stern method. When play resumed, the target was further reduced to 86 off six overs.
At that stage of the match, Trinbago required another 52 off 17 balls and it seemed to be a tall order for the visitors. However, Bravo moved into top gear and explored every nook and cranny of the ground to floor the home side into submission. He thwacked Samuel Badree for three sixes in a row in the fourth over to bring the equation down to 33 off the last two. The left-hander and McCullum then changed the course of the game by thumping Mohammad Nabi for three sixes and a boundary in the fifth over.
Nabi’s 23-run over proved costly in the end, with Trinbago needing just 10 off the final over. Bravo clobbered Jonathan Carter for two more hits into the stands to secure an astounding win for the visitors with four balls to spare. The home side wasn’t helped by the fact that the ball got wet, which made it difficult for the bowlers to grip.
Trinbago’s come-from-behind win sent the the visitors’ camp into tizzy as the side’s players invaded the ground to celebrate the victory. It also brought out out a cocktail of emotions, as most of Patriots’ players stood vanquished and expressionless, wondering what might have been. Sport is undoubtedly a bittersweet symphony of ecstasy and pain.
Earlier, Chris Gayle (93) continued his rich vein of form to decimate the opposition ranks. His innings comprised eight sixes and five boundaries. The veteran opener laid the groundwork for a sizeable total by stitching an opening stand of 58 in 29 balls with Evin Lewis (39 off 14). Lewis was the more aggressive of the two during the initial phase of the innings.
The left-hander gave a glimpse of his power-hitting by thumping Ransford Beaton for a six and two boundaries in the fourth over. Just six deliveries after the young opener was dismissed by Sunil Narine, play was stopped due to a major power grid failure.
It took one hour to fix the issue and when the players returned back to the field, it was reduced to 18 overs a side. It was at that juncture of the match when Gayle decided to hit the accelerator pedal as he thwacked Ashley Nurse for a couple of sixes.
Unfortunately, there was another slight delay due to rain and the game was further reduced. After resumption of play, it continued to rain sixes and fours from Gayle’s willow. The southpaw smashed Dwayne Bravo into the stands a couple of times in the 10th over and in the final over, collected 14 off Beaton before falling to the Guyana pacer.
By then, he had already put the home side in pole position by powering them to a massive total. In the end, however, it didn’t prove to be enough as the Trinbago pair stole the show.
Both teams have already qualified for the knockouts. Trinbago are perched on top of the table with 14 points, while Patriots slot in at second position with 11 points.
Brief scores: St Kitts and Nevis Patriots 162/3 in 13 overs (Chris Gayle 93, Evin Lewis 39; Sunil Narine 1-36) lost to Trinbago Knight Riders 88 for 2 in 5.2 overs (Brendon McCullum 40*, Darren Bravo 38*; Ben Hlifenhaus 1-17) by 8 wickets via DLS method.