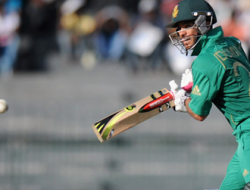 DUBAI, United Arab Emirates (CMC) — Rookie West Indies opener Kraigg Brathwaite has jumped 11 places in the International Cricket Council batting rankings, and into the top 40 for the first time in his career.

The 22-year-old is now ranked 37th in the world, alongside West Indies teammate Marlon Samuels who also moved up seven spots in the latest rankings released yesterday.

Their upward movement comes after both batsmen struck hundreds in the second Test against hosts South Africa in Port Elizabeth, which finished in a draw on Tuesday.

Brathwaite hit 106, his third Test century, while Samuels fashioned a bold 101, his sixth hundred in the longer format. The pair put on a record 176 runs for the third wicket.

There was no such luck for veteran left-hander Shivnarine Chanderpaul, who slipped one place down to sixth. The 40-year-old is the only West Indies batsman in the top 30. However, he has struggled on the tour, with scores of 21 and four in the first Test in Centurion, and seven in Port Elizabeth.

In the bowling rankings, West Indies fast bowler Kemar Roach remains in the top ten, but has fallen three places to tenth. The right-armer made a bright start to the first Test with two early wickets, but picked up an injury late on the first day and has since been ruled out of the series.

Left-arm spinner Sulieman Benn remains unmoved at 21st with off-spinner Shane Shillingford, who is not on tour, ranked 23rd.

There is no other West Indies bowler in the top 50.