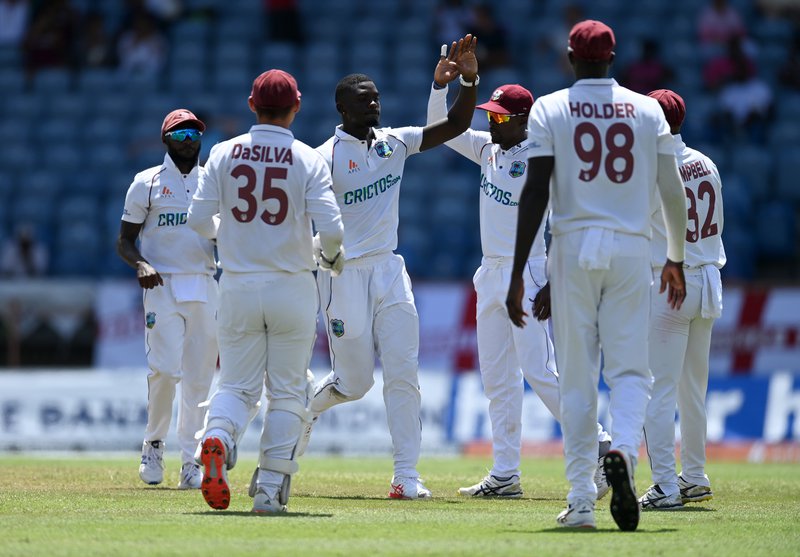 An excellent team bowling performance by the West Indies all-pace attack routed the English top-order in superb fashion and gave them the ascendency on an enthralling opening day. Despite late rearguard resilience from England’s lower-order – which saw the last three wickets add 104 runs –  the home have the upperhand as the visitors were bowled out for 204.

West Indies skipper Kraigg Brathwaite won the toss at the idyllic venue hosting its fourth test match and decided to have a bowl – a decision influenced by a surface that appeared to have a bit more grass on it than in the previous two drawn Tests in Antigua and Barbados.

England were soon under significant pressure when Kyle Mayers, returning to the side in place spinner Veerasammy Permaul, took the scalps of Zak Crawley (7) and the massive wicket of England captain Joe Root (0). The early departure of the England captain put the middle-order under pressure.

The impressive Jayden Seales removed Dan Lawrence leg before to spark a collapse either side of lunch, as five wickets fell for 21 runs in the space of 12.1 overs. Alzarri Joseph and Kemar Roach joined Seales in running through England’s batting line-up, and when Ben Foakes was clean-bowled by Seales the visitors were in deep trouble at 67-6.

Chris Woakes then offered some resistance but he was also castled – by Seales for 25 – to leave the score at 114-9 just after tea. Then came a frustrating resistance spell of the game for the home players, as the last pair of Jack Leach and Saqib Mahmood  put on 90 runs for the final wicket as they survived the second new ball and played for bold shots.

The partnership was the highest of the innings, as the left-handed Leach made 41 not out and last man Mahmood scored a career-best 49. The stand was finally broken in the last over of the day when part-time off-spinner Jermaine Blackwood forced an error from Mahmood and he was bowled one short of a half-century. 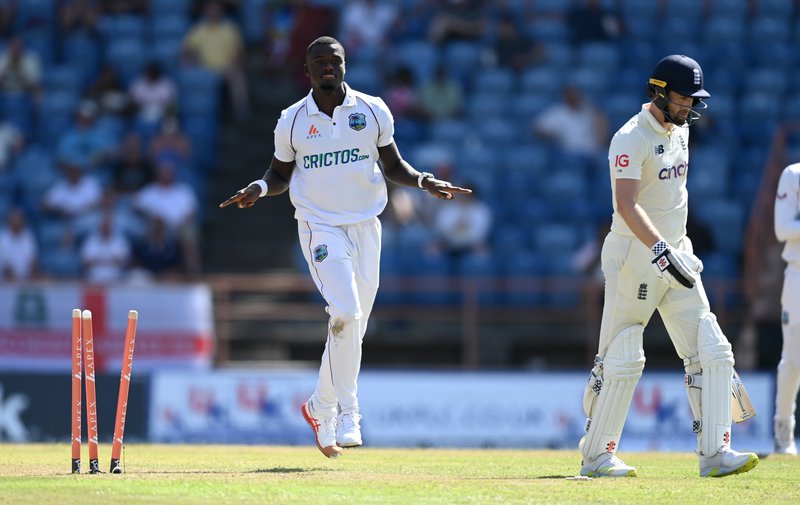 Reflecting on the day’s play Seales said: “I expect them to get the English guys out before 200, probably 150. But the most I think we let them off the hook. And it was a matter of us if we get in that same situation again to come out on top. But it’s definitely game on now, so hopefully our batsmen can continue doing for us what they have done well so far in this series and help us get this win.”

Play will resume on Friday at 10am (9am Jamaica Time).