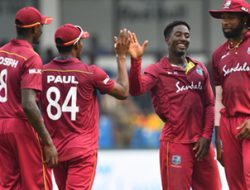 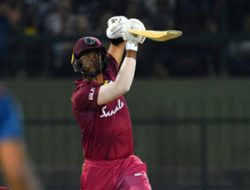 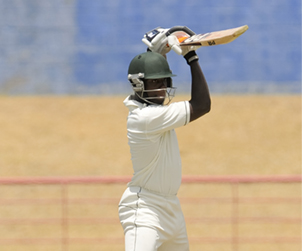 ST. JOHN’S, Antigua – Rain pumped the brakes on the top two teams in the 2019-20 West Indies Championship on Thursday.

But Nkrumah Bonner caught the eye with his third first-class hundred and second this season to lead a strong Jamaica Scorpions batting performance against Windward Islands Volcanoes.

Defiant batting from Joshua da Silva kept front-runners Barbados Pride from running over Trinidad & Tobago Red Force before rain brought an early close to the feature contest on the first day of seventh round matches in the Championship.

Red Force 192-5 vs Pride at the Brian Lara Cricket Academy in Tarouba, Trinidad

Da Silva was not out on 67 and newly-appointed captain Imran Khan was not out on 21 and were just getting into the swing of things when stumps were drawn an hour and 40 minutes early because of the weather.

Test opener Kyle Hope, their long-serving draft choice from Barbados, scored 40 and Isaiah Rajah made 33 and had earlier carried the Red Force’s batting.

Choosing to bat, Red Force got a sound start from Hope and Cephas Cooper, the pair putting on 59 for the first wicket.

Kyle Mayers, bowling for the first time since picking up an injury in the Pride’s opening match this season, grabbed three wickets in five balls – including Hope for 40 – to have Red Force reeling on 60 for three.

Da Silva came to the crease and steadied the innings with Rajah in a stand of 84 before Chemar Holder, the season’s leading fast bowler, struck twice to unsettled the hosts again.

Mayers ended the day with 3-39 from 15 overs and Holder finished with 2-49 from 18 overs, carrying his tally of scalps for the season to 31.

Scorpions 285-3 vs Volcanoes at the National Cricket Stadium in St. George’s, Grenada

Bonner was undefeated on a career-best 131 and shared two major stands with Test batsman Jermaine Blackwood and former Scorpions captain Paul Palmer that led a recovery for the visitors after a shaky start.

Blackwood gathered 68 and Palmer was unbeaten on 67, sharing successive century stands with Bonner, after the Scorpions won the toss and stumbled to 16 for two inside the first 40 minutes of play.

Bonner came to the crease and put on 112 for the third wicket with Blackwood before he engaged with Palmer for a 185-run, unbroken fourth wicket stand that added frustrated the Volcanoes just when they were looking to make headway.

Left-arm pacer Preston McSween has been the most successful Volcanoes pacer so far with 2-48 from 18 overs.

Jaguars 115-4 vs Hurricanes at the Guyana National Stadium in Providence, Guyana

Jaguars captain Leon Johnson made 35 and was the only other batsman that reached 20, sharing a valuable 73 for the third wicket with Singh, but he was one of 4-41 from 25 overs for Cornwall that put a check on the home team’s advance.

Choosing to bat, Jaguars stumbled to 14 for two inside the first hour of play, when new-ball bowler Sheno Berridge pulled up injured after just one over and Cornwall replaced him.

Johnson came to the crease and in between lengthy delays for the weather forged ahead with fellow left-hander Singh to get the Jaguars out of the hole.

Cornwall came back for a second spell towards the end of a topsy-turvy day to remove Johnson and Christopher Barnwell for eight to put the Jaguars under late pressure.