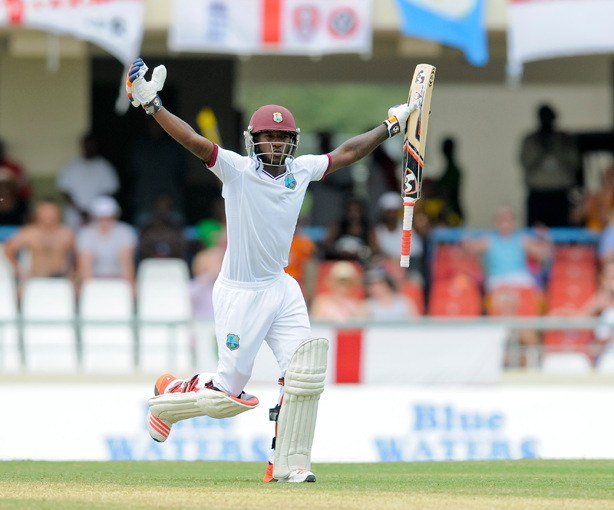 NORTH SOUND—West Indies batsman Jermaine Blackwood hit an unbeaten 112 but the momentum in the first Test remained with England yesterday as the tourists built a lead of 220 in their second innings on the third day at the Sir Vivian Richards Stadium in Antigua.

Blackwood led the West Indies reply to England’s first innings total of 399, but their last four wickets tumbled for 19, the last three for three runs to be all out for 295 at tea, a deficit of 104.

The hosts struck early in England’s second innings when an incisive new ball spell by Jerome Taylor accounted for the cheap dismissals for the second time of the match of openers Jonathan Trott for four and captain Alastair Cook for 13.

The run out of first innings century-maker Ian Bell for 11 reduced England to 54 for three before the West Indies effort waned. Left-hander Gary Ballance and Joe Root steadied things with an unbroken partnership of 64 that boosted England to 116 without further loss by the close, with Ballance on 44 and Root on 32.

When the West Indies resumed at 155-4, the 23-year-old Blackwood and veteran left-hander Shivnarine Chanderpaul carried their fifth wicket partnership to 93 before off-spinner James Tredwell claimed the first of his three wickets for the day—removing Chanderpaul for 46 to a catch at short extra-cover.

After that, Blackwood alone flew the standard for the West Indies as Ramdin fell for nine, Jason Holder for 16 and the last three in the order for seven runs between them.

The feature of Blackwood’s batting was his mixture of strokes that brought him two sixes and 14 fours, along with a tight defence, as he completed his first hundred in only his sixth test.

England paid for offering him two chances. Reprieved at 21 on the second day when his catch to first slip off Ben Stokes was negated by a no-ball decision, he was missed before lunch when 43 by Tredwell at gully off a difficult, low chance, also off Stokes.

He also endured a fierce bodyline attack from Broad with the second new ball. His hurried defensive prod against one short delivery dropped just short of wicketkeeper Jos Buttler. An over later, he needed the on-field attention of the team’s physiotherapist when hit on the forearm.

Tredwell, in his second Test, was England’s most effective bowler with 4-47 from 26 overs. Fast bowler James Anderson, playing his 100th Test, claimed his 382nd wicket by dismissing last man Sulieman Benn. He is now one short of Ian Botham’s England Test record of 383.