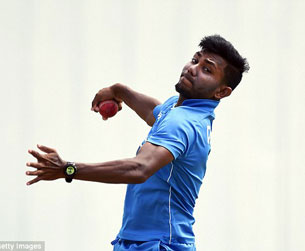 DEVENDRA Bishoo, the 31-year-old Guyana and West Indies leg-spinner, who will be making a return to the Guyana National Stadium in maroon for the first time since 2011, is excited for the opportunity not only to play at home, but to help guide the West Indies to victory in an important One Day International Series against Pakistan.
Coincidently, the last time Guyanese fans saw Bishoo in a West Indies uniform play on home soil was against Pakistan, but now the stakes are much higher, as the home side play for an automatic qualification spot in the 2019 World Cup.
West Indies and Pakistan will play three ODIs at the Providence-located facility, starting on Friday April 7, then on Sunday April 9. The two would wrap up the series on Tuesday, April 11.

West Indies, who are currently ranked ninth with 84 points in the latest ICC team rankings, are under pressure to improve their position on the table as only the top eight-ranked teams as of September 30, 2017, will earn an automatic qualification for the 2019 World Cup.
With the addition of a series against Afghanistan, West Indies now have a total of 12 ODIs – three each against Pakistan and Afghanistan, a one-off against Ireland and five away games against England – before the cut-off date.

“I’m very excited, playing at home for the first time since 2011, so it’s something that I’m anxious about,” Bishoo told reporters yesterday, ahead of the West Indies’ first practice session since arriving in Guyana Monday afternoon.
Bishoo, who has played just 16 ODIs in his career said, “We’re looking forward to this series and we know that we’ll just have to be focused, because this is an important series.”
If West Indies fail to get into the top eight spots by September, they must participate in the 2018 ICC World Cup Qualifier.

But there’s no pressure on the team Bishoo said, adding the mood in the camp is high. “Everybody is comfortable with one another. The T20 series is finished so we’ve put that behind us and now focusing on this series.”
Much drama and controversy has been following the West Indies team, especially over the past year.
However, Bishoo describes the recent events as “things beyond our control” and decided that “we can’t focus on that, we just have to go out and do what we have to do.”