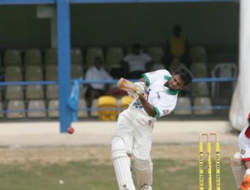 27th November 2014 Comments Off on Best called up for Barbados Pride Views: 1905 News

BRIDGETOWN, Barbados (CMC) — Discarded West Indies pacer Tino Best is among four players called up by Barbados Pride selectors to replace four members of the team travelling with the regional side for the tour of South Africa.

Pride’s captain and opener Brathwaite, along with Benn, Roach and Holder are due to leave the Caribbean on Sunday with the West Indies senior team for the three-Test series against the South Africans.

All-rounder Carlos Brathwaite, who was the West Indies ‘A’ team skipper on the recent tour to Sri Lanka, will take over the captaincy of the Pride.

Barbados Pride are on 12 points in fourth position after two rounds of matches in the WICB Professional Cricket League (PCL).

They drew with Trinidad and Tobago Red Force in their opening fixture and also played to a draw against the Jamaica Franchise in second round action which ended on Monday.

Barbados Pride enters round three in the WICB PCL with a match against Guyana Jaguars at Providence, in Guyana, starting on Friday.

Jaguars are out front on 34 points after outright victories against Leeward Islands and Windward Islands.