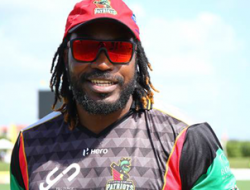 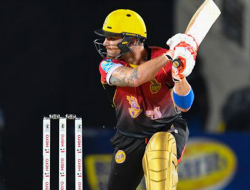 Jason Holder was out for a golden duck, Stuart Broad never even bothered to look behind and appeal. Jermaine Blackwood and Roston Chase had gone in quick succession, and it was Holder’s job at Edgbaston in the second innings to stand up. He didn’t.

Holder was in early on day three at Headingley after Shai Hope’s great innings was ended first ball of the day by James Anderson, then Shane Dowrich was out second ball of the day. West Indies had been talking about fight all through this Test, and after yesterday, where they battled all day to get in front, two balls into the day they were losing it.

Second ball he faced, Holder drove one off the back foot to the boundary. And then he didn’t score for nine balls until he lifted Anderson over mid-on to the rope. Then more dot balls and a two, before three straight boundaries off Stuart Broad. The upshot of which was that, seven overs and four balls since he came to the crease, West Indies had scored 42 runs and gone beyond a 100-run lead.

The last of Holder’s boundaries was a cover drive so full of grace, the pages of coaching manuals felt under-dressed in comparison. It looked so perfect, but it wasn’t from a perfect cricketer.

Holder played as the fourth seamer at Edgbaston, the major reason for doing so was to keep the scores low. But all game he struggled to fulfil his role. He looked as if he was battling injury and even had to abandon bowling mid-over at one stage because of cramp.

Today, West Indies’ seamers served up eight leg-side deliveries in their first seven overs. And that is not counting the short balls; this was just the length balls. Their line was so poor, it seemed like a plan to get England’s batsmen out strangled down the leg side, except for the lack of fielders in those positions and the fact that they also bowled everywhere else to go with it. England hadn’t got away from them, but they would have been put under as much pressure had they been chased by a newborn lamb sucking on a lollipop.

Holder brought himself on; he bowled a maiden, his second over went for one. After six overs he’d allowed only nine runs, the seventh over was even better. The scoreboard pressure got to Cook as he kept trying to push at Holder, ball after ball, beaten and worried, he eventually pushed too hard at one and was caught behind. Holder had beaten Cook in a battle of patience.

In 2015, Jason Holder’s average delivery speed was 82mph; at Edgbaston, he couldn’t have reached speed like that in a fighter jet. Every ball that came out his hand seemed to be pushing through a swarm of pace-hating gnats who were determined to thwart its progress. When you start at 82mph as a Test-match seamer, slowing down is not really a good idea.

Today, Holder was slightly up on pace from the last Test, only by two or three miles, but from his first spell at Headingley, he looked a better bowler. The ball that made him look his absolute best was when he came around the wicket to Stoneman. He dropped one a bit short, it seemed to hit a crack and it slammed into Stoneman’s little finger and dislocated it. It might not have been pace like fire, but it looked quick enough, and while Stoneman batted on, he did so while not holding the bat correctly, and only added 19 more runs.

Almost all aspects of West Indies’ cricket at Edgbaston were terrible. They were poor in the field, their bowlers didn’t do their jobs, they used bizarre tactics, and on the final day, they lost a wicket about as regularly as the Victoria Line tube arrives in rush hour. While Holder couldn’t be blamed for all of that, all game long he did virtually nothing to better any of it.

West Indies in this game have been much better in every facet, bar catching. But there was a time when it all looked like falling apart. England were one-down, the sun was out, the ball was doing a little, but not enough, and while Stoneman and Westley were playing for this win, and their futures, neither looked willing to budge.

But it was a communication error that brought out the worst fielding of the game. Stoneman always wanted two, Westley never seemed to notice, and so when the throw came in, all Devendra Bishoo had to do was take the throw, take the bails off, and collect the easiest run out in history. Instead Bishoo fumbled, and not just any old fumble, but one that coughed the ball up away from the stumps. He scurried after it, turned and fired, and missed the stumps. Bishoo managed to miss two run-outs in one ball.

The next over featured another comical fumble, yet again the West Indian failures seemed like an airborne virus. But in that same over, Holder suddenly found Westley in his sights. Three straight balls, just outside off stump, were followed up by the most obvious sucker ball you’ll have seen in a while. Westley threw his hands at the ball, and Holder’s figures were 11-2-17-2.

Jason Holder had about as bad a game as you can possibly have at Edgbaston. He took a pity wicket, didn’t capitalise on the pink-ball “witching hour”, completely buggered up the second new ball, captained as if cricket tactics were a seven-dimension Rubik’s cube and then failed twice with the bat.

Most of this was overlooked as the entirety of the West Indies team was so damn terrible.

Today one of our #PoliteEnquiries, from @BarneyT10676, asked: “what exactly is it that Jason Holder brings to the Windies? gentle bowling & average to poor batting ?” And on paper, it is hard to know. Coming into this Test, he took a wicket every 88 balls, Joe Root takes one every 96 balls. In 24 Tests he had 42 wickets, making him at best the fifth option with the ball. With the bat, he has one hundred, but only averages 29 runs. Even as a captain, you could argue that Darren Sammy (sorry, two-time World T20-winning captain Darren Sammy) is roughly the same player, but with far more experience and a better win-loss ratio (albeit against weaker opponents).

Holder looks like the sort of person who only gets the job because there are issues with the better players, or there are no better players available, and finds himself not quite qualified for any job, and having to do all of them.

But there is one thing that Holder does – he fights. He was the leader when West Indies won their first overseas Test against a top-eight side in nine years. There was no way his team was going to be as poor under him again as they had been at Edgbaston. When West Indies dropped Joe Root for the second consecutive innings, right after making a match-winning knock the match before, Holder went at him.

It should have been one of the greatest mismatches in modern cricket, the medium-fast (at best) Holder who averages less than two wickets at Test, up against one of the Big Four. To make matters worse, the movement from the pitch had gone, and Holder was starting to leak a boundary every over. And yet, just after another bad ball, one of the slowest seamers in world cricket nipped one into Root’s pads. It looked plumb, but Root reviewed. Root won, and later Holder would go within millimetres of taking Dawid Malan as well.

Today Jason Holder made 43 runs and took 2 for 44, on paper it didn’t look like much. But for West Indies, it was a lot. Holder is certainly not a perfect cricketer, he is not even a top Test cricketer, at best he’s a battler, at worst a bandage. But today he had to stand up. He did, over and over again.