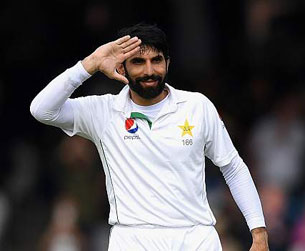 A slow but steady hundred from Azhar Ali and Misbah-ul-Haq‘s 99 ensured Pakistan tightened their grip over the Bridgetown Test. After they secured a lead of 81 in response to West Indies’ 312 on a deteriorating pitch, fast bowler Mohammad Abbas struck with the new ball to have Kieran Powell edging behind. West Indies, ultimately, ended the day 41 runs behind.

‘Always felt I had a chance against Misbah’

West Indies’ plan for the fourth day: The first priority is to get a lead, put some runs on the board for Pakistan to chase. The way the pitch is playing, and if it deteriorates anymore, anything in excess of 175 will be good for us, and give ourselves time and a chance to bowl Pakistan out. We really have to set it up tomorrow morning, make use of that first session. It’s important that Kraigg and Hetmyer carry us as far as possible and one of the top four batsmen can get a hundred that will put us in good stead.

Misbah’s dismissal: I always felt I was in with a chance with Misbah, specially outside the off stump. I was hoping one could pop off a length. I didn’t really expect that one to pop off of a length after he had been batting for so long and so well. I got it in the right areas pretty consistently the entire day and I think I deserved that wicket at that stage.

Tackling the pitch: We have to be positive but also selective. It’s not a pitch that’s for free-scoring I believe. Once we maximize the loose deliveries they give us we will put ourselves in much better stead

The hosts had built up some momentum just before tea when they claimed three wickets for 13 runs but they squandered it, allowing Pakistan’s tailenders to make sizeable contributions in a game where batting in the second innings is expected to get significantly harder.

Jason Holder bowled an incisive spell, and along with Shannon Gabriel, had Pakistan seven down at tea for a lead of 17 runs. Any hopes of bowling them out swiftly thereafter, however, were dismissed by wayward bowling at the start of the final session. They gave away three sets of byes that went for four down the leg side. They were runs that, in this context, were such a gift they might as well have had a bow on them.

In all, Pakistan added 64 runs – of which Yasir scored 24 – each of which was a dagger to West Indies’ chances of victory. With Gabriel and Holder chipping away, Pakistan’s lead hadn’t become unassailable but the early loss of Powell means they now have their backs against the wall.

The day began with Misbah and Azhar in survival mode, scoring 54 runs in 26 overs on a pitch too slow to offer much encouragement to the quicks. The likeliest route to a breakthrough was through the cracks spread across a misbehaving pitch with variable bounce.

The second session was more lively, as if the teams had an epiphany over lunch that Test cricket in 2017 was supposed to be different to the kind they had displayed in the morning. Misbah was responsible for the injection of pace into the innings as Pakistan’s batsmen looked a lot more comfortable with spin operating from both ends.

Misbah broke the shackles when he swung freely for a six over long-on. The Pakistan captain looked good for a hundred, after being stranded on 99 in Kingston. However, he fell agonisingly short on the same score again when a Holder delivery reared up to smash his gloves and loop to gully for an easy catch. What followed was a manic 20 minutes in which Pakistan went from 316 for 4 to 329 for 7.

Azhar brought up his 13th Test hundred shortly after, with a cut past backward point for four. However, Devendra Bishoo was beginning to find his range, and beat Azhar’s bat from around the wicket on more than one occasion. Eight overs in, he found the outside edge of Azhar with a sharp legbreak, breaking a 98-run partnership that took over 42 overs to accumulate.

Misbah, though, continued to play in a liberated mood, sweeping well and even bringing out the reverse sweep to neutralise the spinners’ leg-stump line. As a result, the runs began to flow freely, with 67 coming off the 15 overs of spin from both ends. By then, Pakistan were ticking off the milestones: the 300, the 50-partnership between Asad Shafiq and Misbah, and then going past West Indies’ first-innings total. However, it will be the one that got away – by one run yet again – that will likely remain memorable, as Misbah became the first man in Test history to have three scores of 99.

The mini-collapse that followed Misbah’s dismissal was West Indies’ best spell of the game so far. If they are to fight back against the odds once again during this Test, they will have to produce a better one yet with the bat on the fourth day.