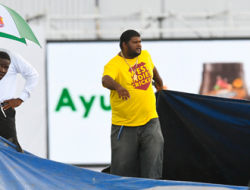 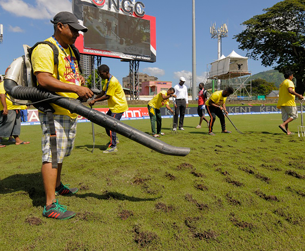 21st August 2016 Comments Off on Another frustrating day at the Oval Views: 1070 News

Some days local fans are frustrated by the performance of the West Indies cricket team, yesterday they were left frustrated with the drainage system at the Queen’s Park Oval, as under brilliant sunshine, there was no play on the scheduled second day of the Fourth Seagrams Test match because of as unfit playing field.

West Indies were to resume on their overnight score of 62/2 but the players stayed at the Hyatt Regency until lunchtime. When they arrived there was no possibility of going out on the field as the damp arena prevented even a warm-up session.

West Indies Cricket Board (WICB) head groundsman Ken Crafton speaking to Guardian Media said the situation arose from problems with the drainage. “We have not been able to go out there for action because the ground is wet. Every hour we would go and have a look and yet with brilliant sunshine the ground is still not getting drier. The problem here is one of drainage. Moving forward the authorities here have to look at the use of the ground. When you have plenty usage, there is not enough time to have the outfield prepared as you would like.

“The contractor who was supposed to have the outfield aerated did not have the time to work on it and hence the problems. If he could have gotten the chance to work, then you would have found that surface moisture would have evaporated quicker.