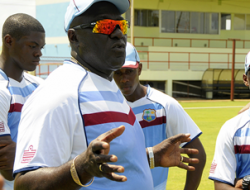 South African batting mainstay Hashim Amla says that the time spent out in the middle against the West Indies President ‘s XI has done his team the world of good.

Amla scored 92 as South Africa, touring the West Indies to participate in the Tri-series, tied their warm-up match against the West Indies President ‘s XI at the Queen ‘s Park Oval on Sunday night.

Batting first, South Africa made 280 for nine of 50 overs and when the rain came to finally washout the clash, the West Indies President ‘s XI was 127 for three of 24.1 overs.

Speaking after the match the bearded Amla said: “It was a really good sign that our bowlers got some time in the middle before it started raining. It was turning out to be a good game.

“They bowled well. It started raining and the ball got really wet, but even then they bowled decently. Getting overs under the belt is the most important thing.”

The South Africans left yesterday for Guyana, where they open their challenge for honours in the Tri-series against the West Indies on Friday at Providence.

Missing from the practice clash were star batsman AB de Villiers and wicketkeeper/batsman Quinton de Kock. However, Amla thinks that with their constant playing in the Indian Premier League (IPL), they will be ready for action.

“I don ‘t think (the difference between T20 and ODIs) is that big. The only thing is that you have a lot of time to set the game up. You have to remind yourself that there is a lot of time still left in the game, but it ‘s a lot easier to go from T20s to one-dayers than from a Test match.”

The other team in the Tri-series is Australia and they will go into action next Sunday against the West Indies also at Providence.

The West Indies, meanwhile, has rounded of their preparations in Barbados, where they lost two matches to a Select Barbados XI and will fine tune their game over the next few days in Guyana before the opening clash.